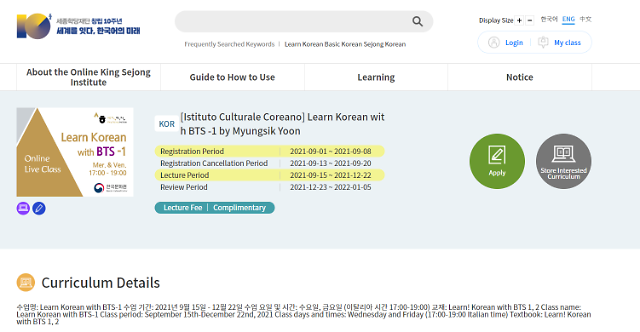 Using PC or a mobile phone, anyone can take Korean classes after taking a level test through the online platform. Students can receive personal advice from their online instructors. For those interested in Korean tradition and culture, culture-related classes are provided.

According to data released by King Sejong Institute, 61,337 students were enrolled through the online learning platform with a total of 772 courses. The number of classes also increased by 16.1 percent from 665 in 2021. The number of students has doubled from 2020 when only 142 classes were available.

The King Sejong Institute was launched in 2007 to popularize the Korean language to meet growing demands from Korean learners all over the world. As of June 2021, there were 234 King Sejong centers in 82 countries. The institute was named after Sejong the Great, a king who invented the Korean alphabet called "Hangul" during the Joseon dynasty that ruled the Korean peninsula from 1392 to 1897.

Data released by DuoLingo, a smartphone language learning app with more than 50 million monthly active users, the Korean language stood second in the list of fast-growing languages in the world as of 2020. It was the seventh-most popular language to study through DuoLingo's app and gained popularity among learners from the United States, China, India and Southeast Asian countries such as Indonesia and the Philippines.