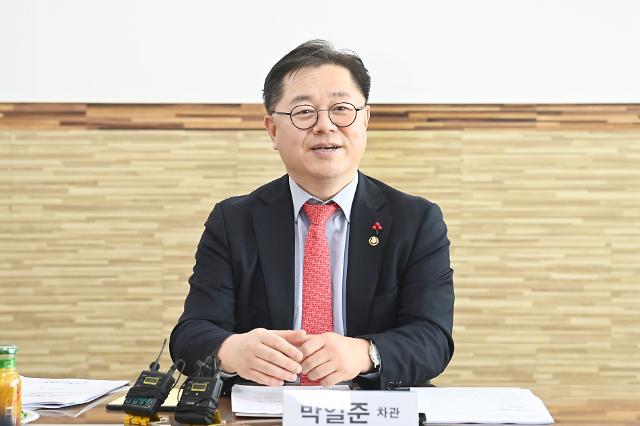 Park Il-jun, second vice minister for trade, industry and energy, speaks during a meeting with representatives of medium-sized businesses at the building of MCNEX, a company specializing in components and materials, in Songdo, Incheon, just west of Seoul, on January 19. He disclosed a plan to spend 80.2 billion won ($65 million) supporting research and development (R&D) for med-sized firms to increase their exports.[Courtesy of the Ministry of Trade, Industry and Energy]

On January 19, the Ministry of Trade, Industry and Energy announced the plan after Second Vice Minister Park Il-jun held a meeting with business representatives at the building of MCNEX, a company specializing in components and materials, in Songdo, Incheon, just west of Seoul.

The ministry said the government will provide 4 billion won each for 16 projects of developing new technologies for four years. The state support is aimed at helping companies explore global markets under the “World-class Plus” program.

The government also plans to select 25 consortium of businesses that can receive aid for stabilizing supply chains through technological cooperation between small and medium enterprises.

Besides, the ministry has decided to promote commercialization of newly developed technologies through industry-academic cooperation. To that end, the ministry plans to offer 4.5 billion won each to three consortiums to be composed of companies, universities and research institutes for a five-year period.

It also plans to provide 600 million won to eight consortiums of medium-sized firms and universities to support their R&D collaboration in data, network and artificial intelligence for two years.