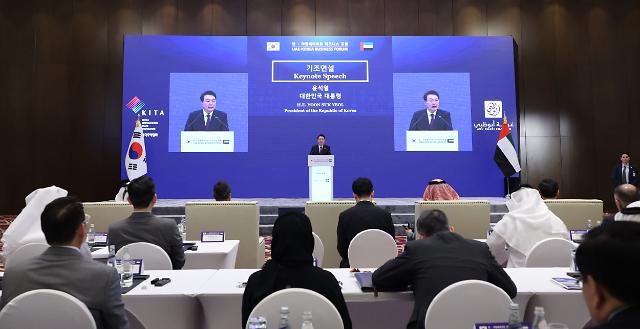 President Yoon Suk-yeol delivers a keynote speech at the Korea-UAE business forum held in Abu Dhabi on January 16. Companies from both countries signed 23 memorandums of understanding (MOUs) and contracts worth $6.1 billion during the forum which attracted over 320 government officials and businesspeople. [Yonhap]

SEOUL -- Domestic companies are vying to strike a deal with United Arab Emirates’ firms after the UAE promised to invest $30 billion (about 37 trillion won) in South Korea.

On January 16, the Ministry of Trade, Industry and Energy held a Korea-UAE business forum in Abu Dhabi to help South Korean corporations look for UAE partners as part of efforts to increase exports to the Middle Eastern country and explore business opportunities there.

The two leaders adopted a joint statement which calls on the two countries to strengthen cooperation in nuclear power, renewable energy, investment, and defense sectors. The statement mentioned the UAE’s promise on the large-scale investment in Korea, the fourth-largest economy in Asia.

Companies from both countries signed 23 memorandums of understanding (MOUs) and contracts worth $6.1 billion during the business forum which attracted over 320 government officials and businesspeople. The MOUs and contracts were focused on strengthening cooperation in energy and nuclear power as well as new technology fields such as smart city, smart farm, cultural content, and clean fuel.

In the nuclear power and energy-related sector, five Korean companies including KHNP-KNP and UnisonHKR agreed to sign contracts worth $4.6 million. Daehan Engineering & Construction initialed MOUs on a project worth $20 million with the UAE’s waste management agency to set up a waste recycling plant to extract energy.

Samsung C&T Corp. reached an agreement with the UAE’s Masdar to cooperate in hydrogen and renewable energy. It also initialed an MOU with Abu Dhabi National Energy Co. to forge a partnership in power transmission and gas development projects.