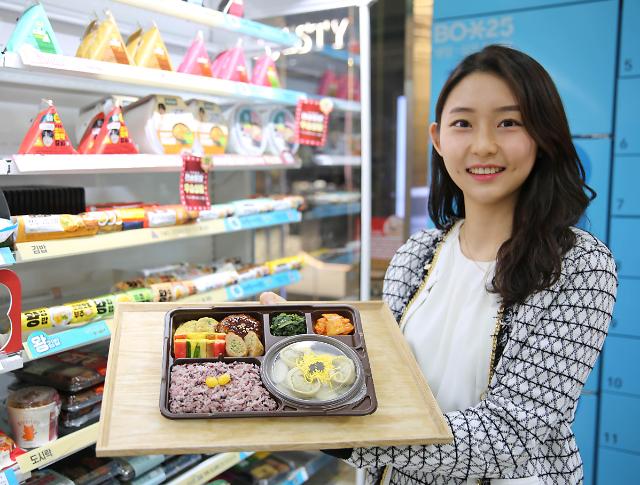 SEOUL -- South Korean convenience store franchise GS25 has released a premium lunchbox menu for "home-aloners," single-person households who chose to stay at their homes rather than to visit their families in their hometown. The premium meal box consists of traditional Korean menus including Tteokguk, a rice cake soup consumed during the Korean Lunar New Year holidays called "Seol."

Seol, a three-day festival that celebrates the Lunar New Year, is the largest traditional Korean holiday. Some 30 million people move by personal vehicles, and public transport including intercity buses and bullet trains to visit their parents and relatives. On the main day of the three-day festival, non-Christian families gather to hold a memorial ritual called "Charye" to honor the ancestors by offering them a table full of special food and alcoholic drinks. The food and drinks are shared by family members after the ritual.

Tteokguk is an iconic dish made using "Tteok," sliced rice cake, and beef broth. While the southern regions only make Tteokguk using rice cake slices, People who live in Seoul and northern regions also include "Mandu," Korean-style dumplings to the rice cake soup. It is believed that people are a year older when they eat a bowl of Tteokguk in Seol every year.

GS25 said that the convenience store franchise released the premium lunchbox containing six traditional dishes -- Tteokguk, black rice, grilled marinated beef, skewered vegetables and beef, meatballs, and a herb salad -- to treat those who do not visit their home towns during the Seol festivities.

An annual survey of 999 people aged 19 and older, conducted by online job-searching portal service operator Incruit, showed that more than 50 percent of young workers in their 20s and 30s decided not to return to their hometown for the traditional festival in 2021 because they would rather spend time for themselves doing personal things like reading, studying, or just resting.

"We will do our best to provide the best service and product for customers visiting our stores during the Lunar New Year festival," GS25 said in a statement on January 16. The convenience store operator will resupply popular products including snacks, alcoholic drinks, coffee, meal kits, and medicines like painkillers so that they will not get sold out during the festival period.