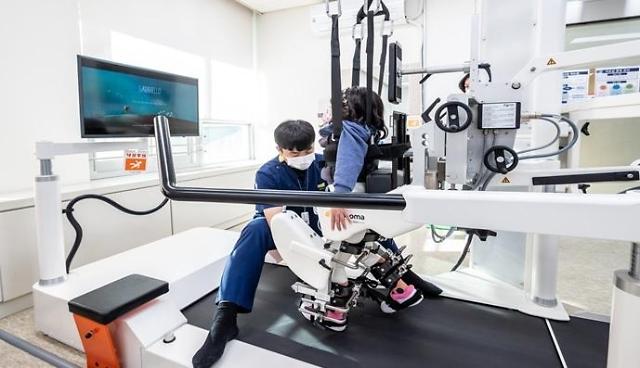 SEOUL -- A children's hospital in southern Seoul has adopted a robot that helps the rehabilitation of patients who injured their upper limbs including arms and shoulders. Using ergonomic devices that provide arm weight support, children with severe muscle diseases can restore their arm strength by continuously swinging their arms.

According to a statement released by Seoul City on January 16, the solution created by a global rehab robot maker will be used at Seoul Child Hospital in the southern district of Seocho. The rehab robot encourages patients to move their injured body parts through virtual reality (VR) games that require repetitive hand and arm movements. Patients with cerebral palsy, traumatic brain injury, and muscle diseases can improve upper limb functions. Depending on the injured body part, different joint movement therapies will be provided.

The city-run hospital also adopted a wearable robot to help children with walking disorders in 2020. A pair of robot legs distributes the weight of the patient so that he or she can practice walking. The speed of the foot movement can be adjusted. The robot is also equipped with a VR device that checks the walking pattern of a child patient walking on a treadmill in real-time.