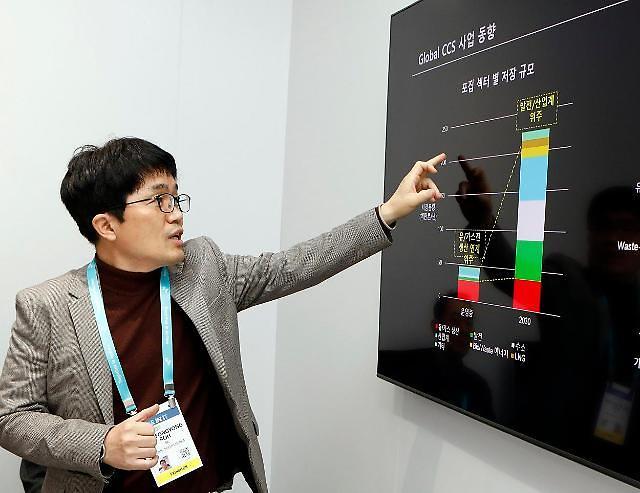 LAS VEGAS -- SK earthon, the eco-friendly energy business wing of South Korea's SK Group, has revealed the company’s blueprint to become an industry leader in the carbon capture and storage sector at the Consumer Electronics Show held in Las Vegas.

The carbon capture and storage (CCS) technique uses special equipment to collect carbon dioxide created after burning fossil fuels or biomass before it enters the atmosphere. Using CCS, up to about 70 percent of carbon is captured and stored either in deep geological formations or in the form of mineral carbonates. As of 2022, the carbon capture technique re-collected some 0.001 percent of global carbon emissions.

According to the US National Energy Technology Laboratory, the North American continent has enough capacity to store more than 900 years' worth of carbon dioxide at current global production rates. The United States and Australia have legalized the geological storage of carbon dioxide and are conducting research for the commercialization of the CCS technique.

SK earthon said during a Consumer Electronics Show (CES) tech day event on January 6 that the company will roll out various CCS businesses at home and abroad to have the capability to store some 16 million tons of carbon dioxide by 2050.

On January 2, the company signed a cooperation agreement with British carbon capture company Azuli to jointly build CCS business models. The two companies will first seek business opportunities in the U.S. and Australia before they make a foray into other continents including Europe and Asia. Azuli currently operates two CCS operations in the Persian Gulf area.

In August 2022, Petronas, a Malaysian state oil and gas company, joined hands with six South Korean companies including SK earthon to push for the cross-border CCS project that will store captured carbon dioxide near an oil block called "SK427" off the northwest coast of Borneo.

SK earthon and Petronas will explore, select and operate a storage site while SK energy, Lotte Chemical, and GS Energy will handle carbon capture. Samsung Engineering will be in charge of business development and Samsung Heavy Industries, a major shipbuilder, is responsible for transportation.

"It is important for CCS businesses to find the right place for storage that can permanently isolate carbon dioxide and in order to do so, companies must have exploration capabilities. SK earthon will utilize the industry's top-class technology and capabilities in the exploration sector," SK earthon's Green Center head Noh Jeong-yong said in a statement on January 2.