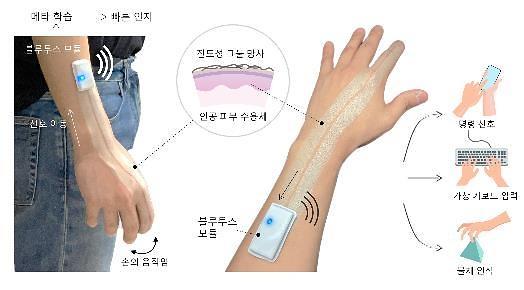 
SEOUL -- A joint team of researchers has developed a nanomesh-based electronic skin that can recognize hand movements and send collected data to a control tower using Bluetooth communication. The stretchable nanomesh can be used for inputting commands in a virtual reality environment using hand gestures.

Artificial skin equipped with various sensors have been developed but the skin component with the ability to learn, categorize and recognize the movement of hands were bulky due to additional device for computing. Also, the skin material was not very stretchable, making it hard to be used in real-life situations.

The Ministry of Science and ICT said that a joint team of researchers from the Korea Advanced Institute of Science & Technology (KAIST), Seoul National University, and the United States Stanford University developed the smart electronic skin. The research was published in the December 28, 2023 issue of Nature Electronics, an international online journal.

The nanometer-thick smart skin, produced using the 3D-printing technique, maintains its conductivity when stretched or bent. The skin will detect changes in the electric current created by hand movements and send movement data to a control tower system. Collected data will be processed through a learning system so that the skin could recognize different movements.

According to the science ministry, the smart skin allows its wearer to perform hand movements to give command orders to a system linked to a virtual reality (VR) world. The wearer could input texts without a keyboard and make an object appear on a VR screen just by brushing his or her hand on the actual object.

"The achievement we have earned through this research is the first case of an integration of electronic skin and the latest artificial intelligence technology," the researchers said in a statement on December 28. According to the researchers, the hand movement-recognizing smart skin would bring technological innovation to various sectors including the augmented reality, VR, remote medical services, and robotics sectors.