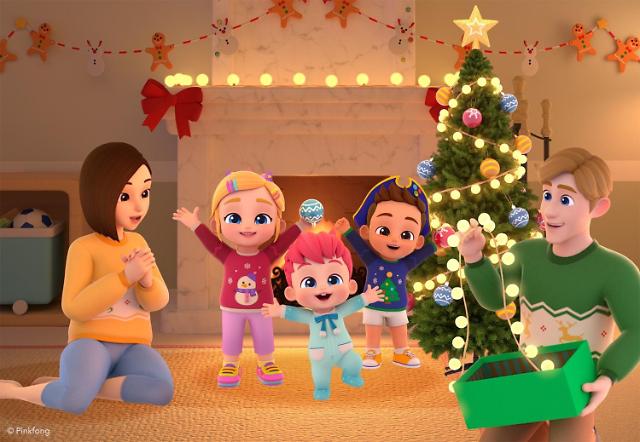 SEOUL -- "Bebefinn," a three-dimensional video animation show featuring the five-member family of a 20-month-old baby named "Finn," will be streamed on Netflix in 190 countries with English, Spanish and Korean subtitles. The animation show created by South Korea's educational entertainment company Pinkfong went viral on YouTube as in its previous work, the "Baby Shark Dance" video.

Finn is an animated child who loves to play with Baby Shark. He has four family members -- mother, father, brother and sister. Finn's family showcases various dance movements with catchy songs that are easy to sing along to. The English YouTube channel of Bebefin has garnered 2.8 million subscribers as of December 2023, nearly eight months after it was released on April 3. The content has about 1.8 million followers on TikTok.

Pinkfong said the Bebefinn series will be released on Netflix in 190 countries including the United States, Britain and Spain at 8 p.m. (1100 GMT) on December 15. "We are happy to release Bebefinn to domestic and foreign viewers through Netflix, the top global online video streaming service," Pinkfong's chief business officer Joo Hye-min said in a statement. The company will release Bebefinn merchandise in the second half of 2023.

Thanks to its fast-growing popularity, Bebefin's YouTube channel will roll out the second season featuring Finn shaping his own philosophy as he grows up and becomes more mature. Unlike the previous season which portrayed the toddler interacting with other characters mainly at home, the new season will depict Bebefinn outside his house.

Bebefinn was developed as a follow-up to Baby Shark. Baby Shark depicts a story about a family of great white sharks with colorful visuals and a catchy melody. The original version, uploaded in late 2015, made a phenomenal hit worldwide and has tens of versions in many languages.

Pinkfong has collaborated with various foreign voice actors to produce content in many different languages. According to Pinkfong's communications manager Yeon Hee-jae, choosing the right words that fit each culture has been quite challenging when translating original lyrics into other languages.