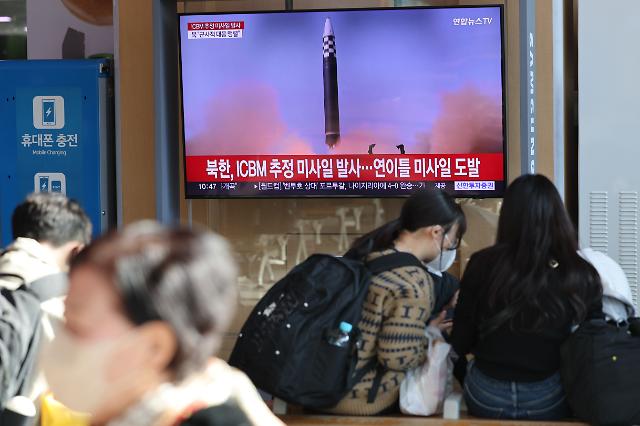 SEOUL -- With its new test launch that delivered more significant political messages than ever to Washington and its allies, North Korea appeared to have achieved considerable progress in its defiant push for the development of intercontinental ballistic missiles capable of attacking any targets in the United States with a large payload.

The missile codenamed "Hwasong-17" exhibited a flight time of about 68 minutes, based on Japan's announcement that it fell in waters west of Oshima, an island in Hokkaido, at 11:23 a.m. The test demonstrated sufficient flight time to achieve a range of over 15,000 km if flown on a traditional trajectory.

The test launch came just a day after North Korean Foreign Minister Choe Son-hui warned that Pyongyang would take "fiercer" military actions if Washington. strengthens its security commitment to using a full range of military capabilities, including nuclear options, to defend its allies.

When the Hwasong-17 model was first seen in a military parade in October 2020, it was widely assessed that it would be capable of delivering a payload of 1,700 kg to anywhere in the US. Through numerous engine tests, North Korea has apparently boosted the thurst power of ICBMs. The Hwasong-17 model is a two-stage, liquid-fueled ICBM with four first-stage engines and a new second-stage engine.

Experts have not been sure whether North Korea has acquired technologies to establish the efficacy of a protection system needed to ensure the warhead survives the rigors of atmospheric re-entry, despite Pyongyang's claim that its ICBM warhead had demonstrated credibility in the re-entry environment.

The Hwasong-17 system will only make significant military and technological addition to the North’s existing ICBMs if it is equipped with a multiple independently targetable reentry vehicle (MIRV) payload, Vann H. Van Diepen, an independent consultant who served 34 years in the US government on issues related to weapons of mass destruction, said in an article carried by 38 North, the website of a U.S. research institute, in April.