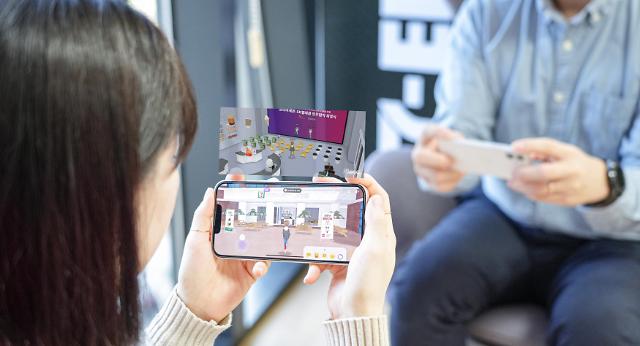 SEOUL -- The South Korean operator of global convenience store franchise 7-Eleven launched a virtual store where visitors can enjoy entertainment performances and events on a metaverse platform created by SK Telecom, a top mobile carrier. Food products such as ramen noodles and beer were recreated into chairs so that visitors can sit and consume various content.

Ifland has showcased the performances of many indie bands and musicians, using volumetric capture technology that uses many cameras to capture an entire scene in 360 degrees. The special image-capturing technique is used to create three-dimensional environments for the production of high-end holographic virtual reality and augmented reality content. In June 2022, a virtual music festival was held using volumetric technology at Ifland so that fans could enjoy surreal content such as performances showing artists.

Korea Seven opened a virtual store on Ifland by recreating its snacks and beers into unique chairs. A large screen and stage were installed to enable users to host events or watch interesting videos with others using avatars. In the metaverse world, a singing competition will be held on November 11 and a quiz event on November 18.

"We will utilize the store on Ifland targeting Generation Zs who are the main customers of our convenience stores," Korea Seven's digital transformation division official Kim Ki-yeop said in a statement.

The virtual store is based on the actual store located at Dong-ah Institute of Media and Arts, a college in Anseong some 67.6 kilometers (42 miles) from Seoul. Users can look around the metaverse campus near the store. Many universities are adopting metaverse to showcase virtual campuses for young students familiar with non-face-to-face activities. Soonchunhyang university held South Korea's first virtual entrance ceremony amid a coronavirus pandemic in 2021, allowing freshmen to meet professors and colleagues using avatars.