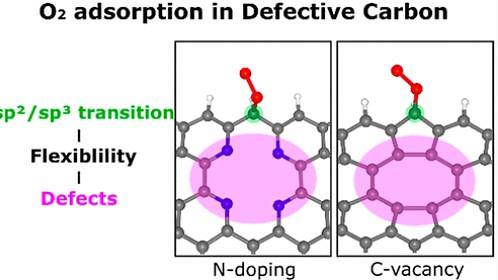 
SEOUL -- Researchers have discovered the key electrochemical mechanism of carbon-based catalyst reactions, paving the way for the development of next-generation catalysts with enhanced performance and lifespan.

Currently, the most popular material for catalysts is platinum. Through electrochemical oxygen reduction reactions, catalysts used in hydrogen production, secondary batteries, and fuel cells can reduce oxygen in water or hydrogen peroxide. Platinum catalysts are very expensive, but because of their high-performance characteristics, there are not many materials that could become an alternate rare metal in the catalyst production sector.

Carbon-based catalysts are regarded as a next-generation material for electric cars and hydrogen fuel cells because carbon is abundant and cheap. Studies have been carried out to increase the durability and performance of catalysts, but the exact mechanism of carbon-based catalysts has not been found.

The Ulsan National Institute of Science and Technology (UNIST) said that its research team used quantum physics-based calculations to focus on the unique structural characteristics of carbon bonds. Researchers found that defects, basically holes missing carbon atoms, in networks increased the flexibility that lowers the energy barrier and enhances the reactivity of carbon materials. Doping nitrogen to fill in defects helped create stable networks of carbon.

"This study result is not limited to electrochemical catalytic reaction and it can be applied to ordinary chemical reactions of carbon materials. It also provides a framework for the understanding of the adsorption reaction of carbon," researcher Choi Keun-su said in a statement on November 2.