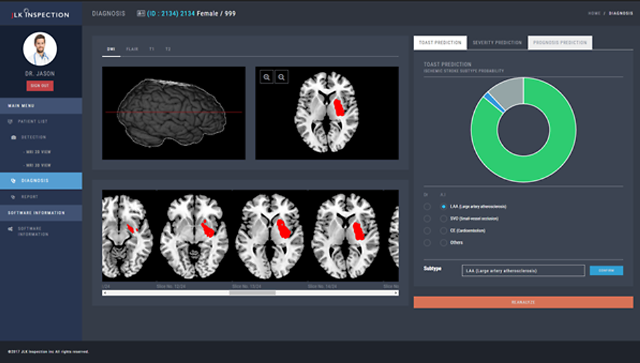 Cerebral infarction is a disease in which blood vessels in the brain are blocked and parts of the brain die. One of the main causes is high blood pressure, which normally occurs among old people. Paralysis of one limb is the most typical symptom. Previously, the disease was usually identified through computed tomography (CT) or magnetic resonance imaging (MRI).

JLK said that JBS-01K would be supplied to Keimyung University Dongsan Medical Center in the southeastern city of Daegu. The solution automatically analyzes cerebral infarction types and provides brain images to medical staff. The solution was approved by South Korea's drug ministry in 2018 and the Thai Food and Drug Administration in early 2022.

JBS-01K, distributed to the university hospital, is part of a state project to support trial distribution and secure clinical evidence. "Through the selection of the demonstration project, we will build a cooperative system between hospitals and companies and make various efforts to acquire new medical technology and register as health insurance," JLK head Kim Dong-min said in a statement on October 20.