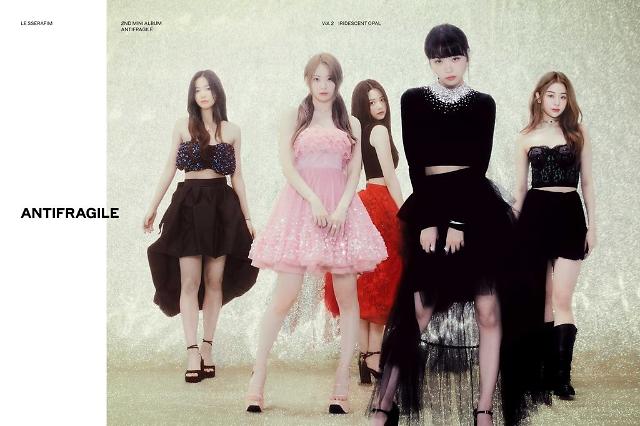 SEOUL -- Le Sserafim, a five-member girl group formed by Hybe's music label, will expand its overseas fanbase by collaborating with Salem Ilese, an American singer and songwriter. The sister band of BTS has already worked with Moroccan-American pop artist ABIR for its debut album released on May 2.

According to Source Music, the rookie group's second mini album titled "ANTIFRAGILE" will be released on October 17 in collaboration with Ilese. On October 8, a video showing the American artist singing together with Le Sserafim’s group leader Kim Chae-won and main vocalist Huh Yun-jin for "Good Parts (when the quality is bad but I am)" was broadcast on South Korea's pay-TV network JTBC.

"chaewon and yunjin have some of the smoothest vocals i've heard from kpop...can't wait to see how they grow over the years," said evergarden, a YouTube user.

Le Sserafim has also worked with Moroccan-born artist ABIR for "Sour Grapes," a song in its debut album "Fearless." In July, a video showing Le Sserafim members -- Kim and Huh -- singing the song with ABIR was uploaded on YouTube, garnering attention through the smooth voices of the two South Korean singers and ABIR’s soulful voice.

The group's debut song FEARLESS entered the Billboard chart eight days after its release and its music video surpassed 100 million views on YouTube just 100 days after its release. The rookie band has worked as a five-member group since May 2022 when member Kim Ga-ram was embroiled in her alleged school bullying. Source music terminated the contract with the troubled member in July 2022.