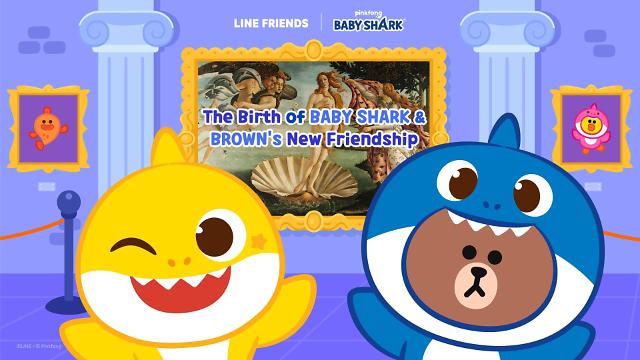 "We will present a different type of excitement through the collaboration between Pinkfong's Baby Shark, which set up a new Guinness World Records title with 10 billion views on YouTube, and global popular character brand LINE Friends," Pinkfong's vice-president Ryan Seung-kyu Lee said in a statement. Pinkfong said six videos that portray LINE Friends characters meeting Baby Shark by getting into an artwork displayed at an art museum would be released on September 14.

The two companies will develop various character items such as toys and clothing that will be sold through Line Friends' online and offline stores and promoted through their YouTube channels.

"Baby Shark" depicts a story about a family of great white sharks with colorful visuals and a catchy melody. The original version, uploaded in late 2015, made a phenomenal hit worldwide and has tens of versions in many languages. The "Baby Shark Dance" video uploaded in 2016 is now one of the most-watched on YouTube.

IPX gained attention for releasing character items for K-pop superstar BTS in 2017. The BTS character items were displayed at "Boon the Shop" which opened in 2000 as a modern hip-hop-style flagship store targeting young people interested in street fashion.