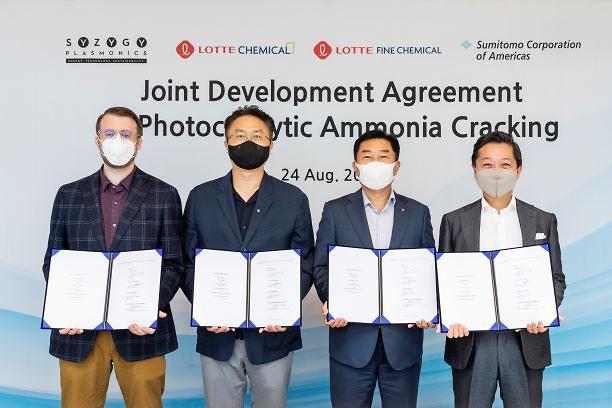 Ammonia is considered an important part of a sustainable hydrogen ecosystem. An ammonia photolysis facility can be operated quickly by electricity, and it is advantageous for the small and medium-sized production of hydrogen. The technology will be used to provide an economical supply system for mixed combustion at power plants that intermittently use hydrogen, or at hydrogen charging stations.

Under a joint development agreement, Lotte Chemical will be in charge of designing and installing production facility systems, while Lotte Fine Chemical is responsible for ammonia supply and the operation of production facilities. Sumitomo will transport a photolysis reactor and photocatalysts.

The production of a reactor and photocatalysts will go to Syzygy, which develops a photocatalytic reactor for fuel cell vehicles and small-scale industrial applications. "We will secure key technologies for hydrogen energy conversion through the world's first demonstration of ammonia photolysis hydrogen production technology," Lotte Fine Chemical CEO Kim Yong-seok said in a statement on August 25.

Ammonia has been proposed as a potential zero carbon marine fuel due to its stability in supply and relatively easy storage and transportation. Ammonia is mainly produced from fossil fuel-based hydrogen. Green ammonia production is where the process of making ammonia is 100 percent renewable and carbon-free.

Green hydrogen is generated by renewable energy or from low-carbon power. Lotte Fine Chemical has been involved in a national project to develop ammonia-based green hydrogen production technology. In August 2021, the company signed an agreement with Trammo, a U.S. commodity merchandiser, on the supply of 300,000 tons of green ammonia.

Lotte Group said it would contribute to the activation of hydrogen and ammonia by supplying green hydrogen based on ammonia pyrolysis to consumers who need large-scale hydrogen. Ammonia photolysis technology will be used for those who need small and medium-sized hydrogen. "We will take advantage of each technology to ensure a fast and diverse supply of hydrogen," said Lotte Chemical CEO Hwang Jin-koo.