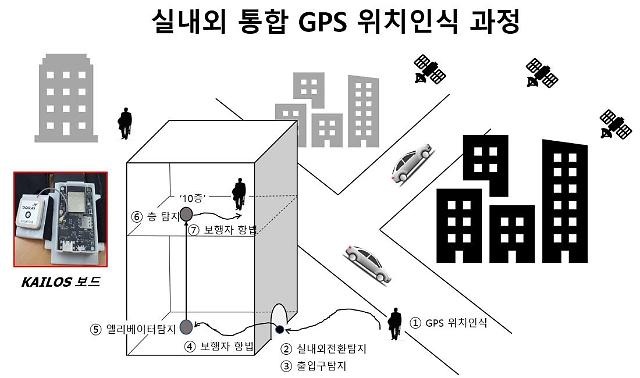 SEOUL -- South Korean researchers have developed an artificial intelligence and satellite-based global positioning system technique that can seamlessly track signals in indoor and outdoor environments. The new system can be used for the development of indoor and vehicle navigation systems.

Normally, global positioning system (GPS)-based tracking systems can only pick up signals sent by positioning devices located in an outdoor environment. When the devices move inside a building or a tunnel, they become useless because signals cannot reach satellites. It is common to see satellite signals being cut off when a vehicle using a GPS navigation service travels through a tunnel.

The Korea Advanced Institute of Science & Technology (KAIST) said in a statement on July 8 that its research team has developed a GPS technique that also uses signals from various sensors and devices including motion sensors, light sensors, and air pressure sensors to detect and locate users' whereabouts inside a building. Using the new GPS technique, the system operator can track objects and people who move into a building and up and down floors using stairs and elevators.

Researchers have created an integrated chipboard including a WiFi receiver chip, a motion sensor, a geomagnetic sensor, and a light sensor so that the chipset can independently track objects. They found that the chipboard had about 95 percent positioning accuracy inside a campus building located in the central city of Daejeon.

KAIST said that special tags will be produced using the integrated chipboard to offer digital guide services for visitors to museums and art galleries. GPS tags can also be used to protect young children and old people inside a building. The chipset also uses AI to maximize the accuracy of the positioning system.

"This is the first time to develop an integrated GPS that can offer positioning services inside an unmapped building where no wireless signals can reach," KAIST researcher Han Dong-soo said. He said that new chipsets will be developed based on the technology.