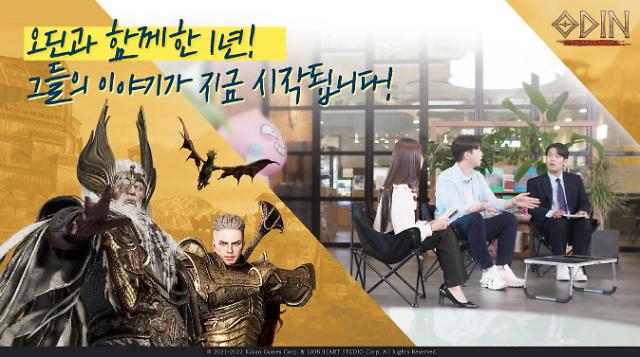 SEOUL -- The game publishing wing of South Korea's web service giant Kakao is ready for the full-fledged overseas expansion of "Odin: Valhalla Rising," a blockbuster mobile game that has garnered the explosive popularity of domestic fans since its launch a year ago.

Kakao Games vowed to make full preparations for Odin's services in Japan and other regions by establishing a differentiated game with next-generation technology, after it completed the acquisition of a 54.95 percent stake in Lionheart Studio on June 30. Odin has already been released in Taiwan since Kakao Games secured global publishing rights in November 2021.

Lionheart Studio has developed Odin, a massively multiplayer online role-playing game (MMORPG) that can be played on mobile platforms and PC platforms. "We will sincerely work hard to make this game loved for a long time through various content that satisfies our users," Lionheart Studio CEO Kim Jae-young said in a statement marking the first anniversary of Odin's domestic service on June 29.

Cloud-native games use the cloud to process certain parts of the game, such as physics, lighting, environments or artificial intelligence, freeing up processing power on a home console, or making sure that players joining an online world can get the same synchronized experience. Playable Worlds aims to unveil its first cloud-native MMORPG and a metaverse platform in 2023.