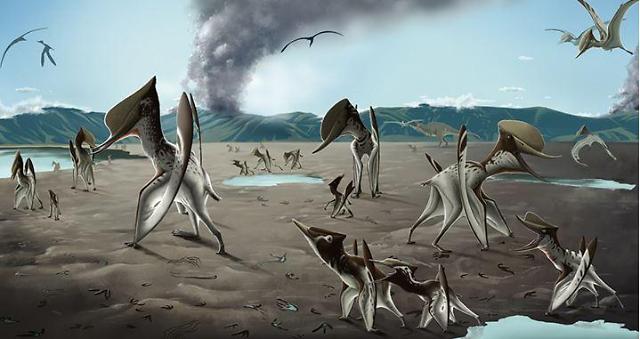 
SEOUL -- An assemblage of pterosaur footprints from the early Upper Cretaceous track site in the southern part of the Korean Peninsula provided new evidence for gregarious behavior, hinting at the possibility that pterosaurs gathered in mixed-age groups some 90 million years ago.

The Seoyuri track site in Hwasun, some 260 kilometers (161 miles) southwest of Seoul, yielded numerous footprints made by individuals ranging from 0.5 to 1.5 meters in wingspan, representing a not yet known from the body fossil record of pterosaurs.

A research team led by Hun Min, a professor of geological and environmental sciences at Chonnam National University, estimated that young and grown pterosaurs lived together, proving the gregarious life of pterosaurs for the first time in the world.

The university said that footprints of 2 to 6 centimeters were densely packed in the Seoyuri site built during the Cretaceous Period of the Mesozoic Era, and the preservation condition was good enough to clearly see the front and rear feet.

"This find provides new evidence supporting the idea that Late Cretaceous pterosaur communities were not entirely composed of large and giant individuals but also included smaller forms," the research team said in a paper published on the website of  Scientific Reports, an online peer-reviewed open access scientific journal.

The assemblage consists of many randomly oriented prints in remarkably high densities, the team said. "The Hwasun pterosaur footprints appear to record gregarious behavior at the exact location by individuals of different ages, hinting at the possibility that pterosaurs gathered in mixed-age groups."

The most undersized known individuals had wingspans of only 0.175 m, while the largest had a wingspan of 10 m, the team said, adding that the high density of variable-sized footprints could be inferred as gregarious behavior of a pterosaur multi-aged flock.