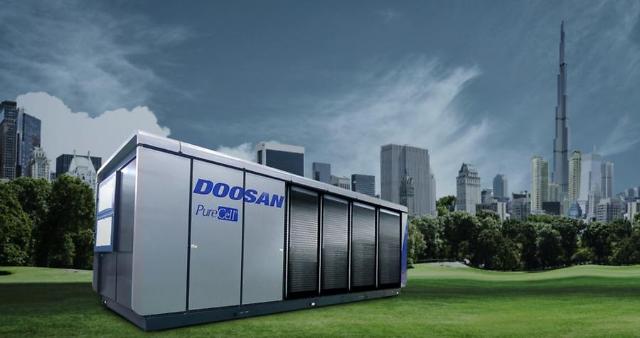 SEOUL -- Doosan Fuel Cell, the clean energy wing of South Korea's Doosan Group, will lead a joint project to replace existing fuel cells with a structure using blue hydrogen, which is favored by industries due to its reasonable production cost compared to green hydrogen based on renewable energy.

Green hydrogen uses electrolysis to split water and release only hydrogen and oxygen. Hydrogen produced by steam reforming is termed grey hydrogen, which is the most common form and is generated from natural gas, or methane. Blue hydrogen is when natural gas is split into hydrogen and CO2 either by steam methane reforming or auto thermal reforming, but the CO2 is captured and stored to mitigate environmental impacts.

Doosan Fuel Cell will work with the state-run Korea Institute of Energy Research (KIER) to develop carbon capture and utilization (CCU) technology linking fuel cells. CCU technology is used to capture carbon generated in the hydrogen production process. It is a key technology to produce hydrogen and reduce CO2 emissions.

Doosan Fuel Cell will develop ammonia fuel cells that use ammonia, a stable hydrogen carrier. Samsung C&T, a trade, investment and construction arm of Samsung Group, will introduce ammonia from abroad. KOSPO will provide a demonstration site. Hydrogen can be produced by burning and reforming ammonia in a micro-reforming system. Ammonia is seen as an ideal resource to establish an eco-friendly hydrogen fuel cell-based infrastructure.

"Through this MOU, we will actively respond to the government's clean hydrogen policy and accelerate the transition to clean hydrogen fuel cells by securing technological competitiveness with a great gap," Doosan Fuel Cell CEO Chung Hyung-rak said in a statement on June 3.