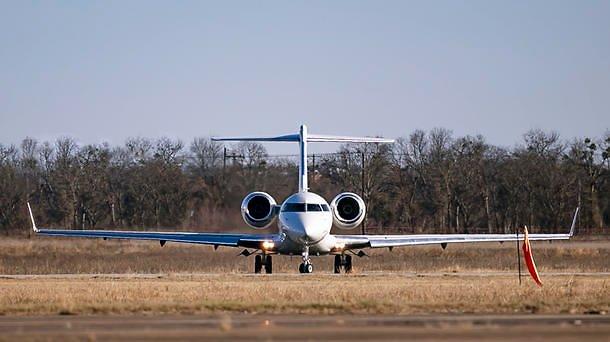 SEOUL -- A new spy plane developed by L3Harris Technologies has been deployed in support of U.S. Army military mission in the Indo-Pacific region. The new aircraft with greater capability and increased standoff ranges than the RC-12 Guardrail platform in service for decades can fly for up to 14 hours at altitudes above 12.5 kilometers (41,000 feet).

The new aircraft would help U.S. troops based in South Korea to enhance airborne intelligence, surveillance and reconnaissance (ISR) capabilities. L3Harris, an agile global aerospace and defense technology innovator in the United States, said it has rapidly deployed its airborne reconnaissance and electronic warfare system (ARES) in support of U.S. Army missions in the U.S. Indo-Pacific Command area of responsibility.

News reports in Seoul said that the deployment of ARES at an unspecified location is seen as a measure to monitor North Korean military movements at a time when Pyongyang steps up efforts to enhance intercontinental ballistic missile (ICBM) and nuclear capabilities. ARES flew over the Yellow Sea to conduct reconnaissance activities ahead of its official deployment, according to Yonhap News.

"Our team rapidly responded to Army's need for a full-spectrum SIGINT solution by upgrading, certifying and fielding the enhanced ARES platform in approximately seven months -- the latest example of our ability to quickly deliver results for critical customer missions," Luke Savoie, President of L3Harris' ISR sector, said in a statement posted on the company's website. Signals intelligence (SIGINT) is information gained by the collection and analysis of electronic signals and communications of a given target.

"The platform effectively demonstrates how the Army can replace its aging ISR fleets by rehosting existing collection capabilities onto an airframe optimized for near-peer operations," Savoie said. ARES is based on the Bombardier Global 6000/6500-class business jet.

L3Harris won an ARES contract in November 2020 as part of a high accuracy detection and exploitation system (HADES) program to develop an aircraft that can replace aging Guardrail spy planes. The new aircraft made its first flight in August 2021.

U.S. spy planes such as RC-135V/W Rivet Joints and RC-12Xs are invisible to public eyes, although they make regular flights on and outside the Korean peninsula to closely monitor North Korean troop movements. RC-135 Rivet Joint's sensor suite allows monitors to detect, identify and geolocate signals throughout the electromagnetic spectrum. RC-12X is based on the U.S. Army's intelligence system which provides operational commanders with near real-time intelligence, precise geolocation data and persistent targeting information.