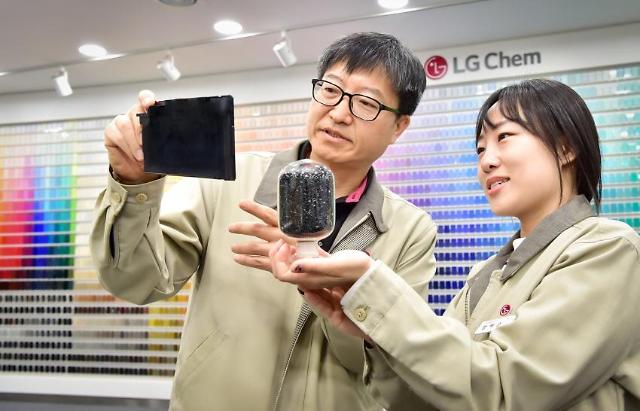 SEOUL -- LG Chem, a chemical unit of South Korea's LG Group, has developed a highly functional fire-retardant engineering plastic material that delays thermal runaway in electric vehicle batteries for the longest time in the world. The commercial construction of the new material that can help drivers earn time to evacuate and extinguish a fire is to begin in 2023.

LG Chem said its fire-retardant engineering plastic material can help prevent flame propagation caused by thermal runaway for more than 400 seconds even at 1,000 degrees Celsius or higher. Based on its research that began in 2009, the company has established a mass production system for commercial production in 2023.

"It is very meaningful that we have studied steadily for more than 10 years to solve customers' pain points," LG Chem's engineering materials division head Steven Kim said in a statement on April 25. "We will lead the rapidly growing e-Mobility material market through continuous R&D and investment in mass production based on the world's best compounding technology."

Thermal runaway is a chain reaction within a battery cell that can be very difficult to stop once it has started. In thermal runaway, the battery cell temperature rises incredibly fast and can cause batteries to explode in extreme cases. It can occur due to an internal short circuit caused by physical damage to the battery or poor battery maintenance, overcharging, and rapid charging.

LG Chem, the parent company of LG Energy Solution (LGES), said its new engineering plastic material is made of a high-temperature thermoplastic called polyphenylene oxide (PPO), polyamide or commonly called nylon, and polybutylene terephthalate (PBT), which is a thermoplastic engineering polymer used as an insulator.

The new plastic material applied to a battery pack cover can help prevent the spread of flames by delaying the combustion time in the event of a firee, LG Chem said, adding that it can be applied to various industries other than battery packs.

LG Chem said that the new material has excellent dimensional stability that maintains its shape despite temperature changes, preventing flame propagation due to thermal runaway for more than 400 seconds even at 1,000 degrees or higher, more than 45 times better than general flame-retardant plastics.