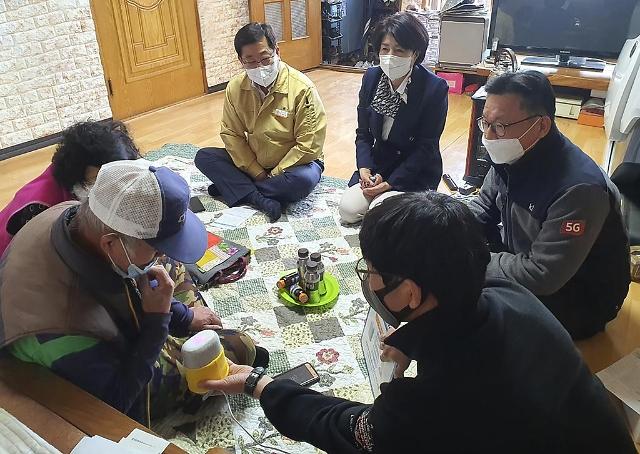 SEOUL -- KT, the biggest telecom company in South Korea, will provide artificial intelligence-based care services for vulnerable elderlies suffering from dementia or depression in the southern city of Naju. The care robots can communicate with lonely residents and notify rescuers in case of an emergency.

Smart AI speakers are devices hooked onto wireless internet networks. They can interact with users through verbal conversations. Users can request the speaker to "turn on music," "call my son," or ask about the weather or an upcoming important schedule. Because of the speakers' ability to talk, some speakers are commercially used for personal monitoring and care services. There were about four million AI voice assistant speakers in South Korea as of 2019.

The number of single-person households has been rapidly increasing in South Korea with a population of about 52 million. Government data released in 2021 showed that some 1.6 million are single households aged 65 or older. The proportion of old people who live alone is gradually increasing from 16 percent in 2000 to 19.6 percent in 2020. The number of lonely deaths also skyrocketed from 68 in 2011 to 1,145 in 2019. As of June 2021, 26,354 elderlies aged 65 or older were living in Naju, accounting for 22.6 percent of the total population.

KT said in a statement on April 14 that the company teamed up with Naju City to provide AI-based care speakers to take care of 70 old people. Care robot speakers capable of understanding the local dialect will ask how their masters are faring three times a day. Emergency workers will be dispatched to the homes of those who request help through their robot assistant. The AI speaker also has a built-in battery so that it can be carried outside or be used during power cuts.

In June 2021, KT provided AI speakers and internet of things (IoT) sensors to 100 single households in Gwangju some 268 kilometers (167 miles) south of Seoul. The telecom company would distribute speakers to some 500 households by the end of 2022. In April 2021, KT teamed up with the Korea Advanced Institute of Science & Technology (KAIST), a prominent state research institute, to develop a care service system that incorporates AI, big data, and information communication technology.

South Korea has adopted various technologies to prevent lonely death such as internet of things (IoT) sensors that can detect temperature, humidity and body movements in real-time. As of March 2020, Seoul has deployed 75,000 IoT sensors at the homes of single-household elderlies.