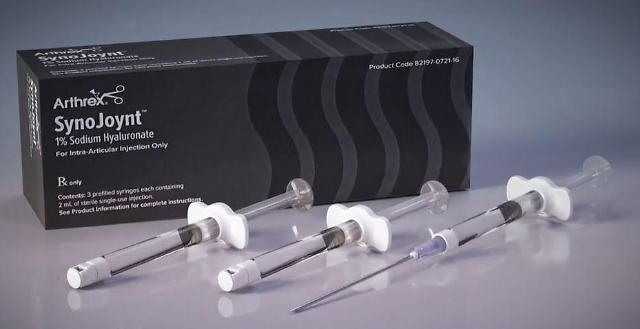 SEOUL -- Hanmi Pharmaceutical, a major drugmaker in South Korea, has selected Arthrex, an American medical device company, as a new partner to sell its arthritis treatment, hyalrheuma, in the United States. Hyalrheuma is a polymer hyaluronic acid injection developed with fermentation technology. It is directly administered to joints.

Arthrex is in charge of marketing and sales, while Hanmi supplies finished products. Hanmi said hyalrheuma would be sold under the brand name "Synojoynt" in the United States. Originally, Teva was in charge of U.S. sales after hyalrheuma obtained sales approval from the U.S. Food and Drug Administration in 2018, but Hanmi recovered copyrights from Teva and joined hands with Arthrex.

"We will do our best to help hyalrheuma made with our technology grow into a successful product in the U.S. market by working closely with a new partner with a strong local sales network," Hanmi CEO Woo Jong-soo said in a statement on March 7.

Hyalrheuma is used to treat knee pain caused by osteoarthritis, a disorder of joints that causes stiffness, pain and loss of movement due to breakdown of lubricating fluid between joints when treatment with common painkillers or other physical therapy does not provide adequate relief. Hyalrheuma works by acting like a lubricant and shock absorber, but results vary.