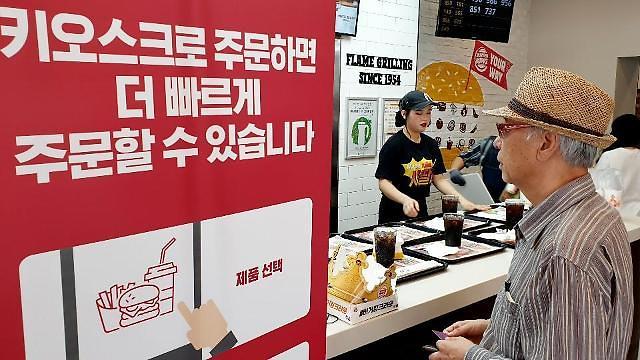 SEOUL --Seoul City has issued guides and standards for digital kiosk operators so that elderlies who are not familiar with digital appliances can use the digital ordering machines with ease. The standards will include large fonts and simpler screen layouts to increase the readability of kiosk menus.

While younger generations familiar with using smartphone apps can make orders and payments with no hassle, it is hard for older people to use the remote ordering system mainly because the smartphone app-like interface of digital kiosks is very complicated and the fonts displayed on the screen are too small.

Seoul Digital Foundation operated by the capital city government said in a statement on January 27 that new guidelines and standards for the operation of digital kiosks were released to help customers of all ages. The guidelines focus on increasing the usability of elderlies. A total of right guidelines and 22 examples of applications were released.

Through the new operation guidelines, Seoul suggested digital kiosk developers to provide a "simple mode" for elderlies, which displays lesser images and larger texts in black and white. The Capital city said that all kiosks must have fonts that are larger than 10 millimeters x 10 millimeters in size and developers should refrain from using pop-up windows and advertisements.