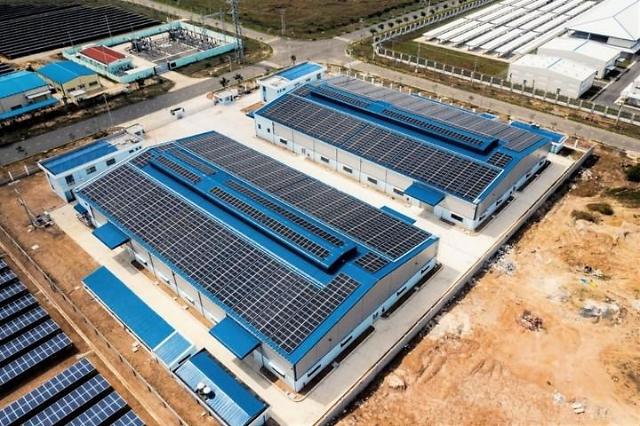 SEOUL -- Through a 239 billion won ($200 million) project, SK Ecoplant, a builder affiliated with South Korea's conglomerate SK Group, will build solar power plants with a total capacity of some 250 megawatts on rooftop idle spaces of four different industrial complexes in Vietnam. The generation capacity is enough to power some 200,000 households.

According to SK Ecoplant on January 25, the company will carry out a four-year project through collaboration with Vietnam's rooftop solar power system developer Nami Solar. Solar panels will be installed on the roofs of factories and warehouses in the four industrial complexes. The renewable energy will be mainly consumed by each industrial complex and some will be sold to state-owned Vietnam Electricity.

SK Ecoplant can also secure about 330,000 tons of certified emission reductions (CER) from the United Nations if the project goes as planned. CER is a right to emit greenhouse gases within a certain period. The remaining emission rights can be traded in the market.

In August 2021, SK Ecoplant and Nami Solar established a joint venture called "Saturn Solar Energy," to jointly carry out the project. SK Ecoplant will register, issue and sell CERs, while the Vietnamese counterpart will be in charge of engineering, procurement and construction (EPC), and operation.
© Aju Business Daily & www.ajunews.com Copyright: All materials on this site may not be reproduced, distributed, transmitted, displayed, published or broadcast without the authorization from the Aju News Corporation.