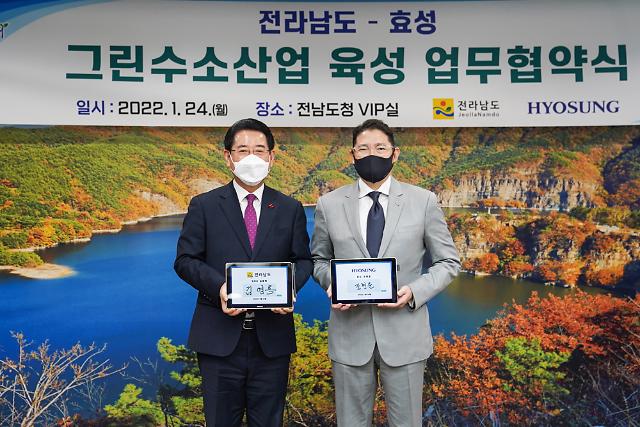 SEOUL -- South Korea's Hyosung Group will produce 200,000 tons of green hydrogen by using a major offshore wind farm complex that will be built in Sinan, a southwestern county that consists of many inhabited islands and uninhabited islands. The group will build two plants capable of producing 10,000 tons of liquefied hydrogen each per year.

The group pledged an injection of one trillion won ($836 million) to produce green hydrogen using renewable energy under a memorandum of understanding with the government of South Jeolla Province, which has disclosed a green energy project to build an 8.2-gigawatt offshore wind farm complex in Sinan County.

"We will contribute to making South Jeolla Province a mecca for the green energy industry in South Korea," Hyosung Group chairman said in a ceremony on January 24. The group will build 10MW water electrolysis facilities before expanding facilities to produce 200,000 tons of green hydrogen later. Green hydrogen can be produced through electrolysis, a process of passing an electrical current through an electrolyzer to split water and release only hydrogen and oxygen.

Because of growing concerns about a dwindling supply of oil and emissions of pollutants, some countries have tried to adopt hydrogen fuel for their public transport system. South Korea has unveiled a roadmap to expand the use of fuel cells for automobiles and the production of electricity. In April 2020, Hyosung partnered with Linde, a Dublin-based engineering group, to build a plant capable of producing 13,000 tons of liquefied hydrogen per year in the southeastern industrial city of Ulsan, using byproduct hydrogen.

Hydrogen is extremely flammable when it is mixed with very small amounts of air. The liquefaction of hydrogen requires cooling to a temperature of minus 253 degrees Celsius and subsequent storage in cryogenic containers. The advantage of liquefied hydrogen is its high density compared to compressed gas, which means that more energy can be contained in a given volume for easy transportation.