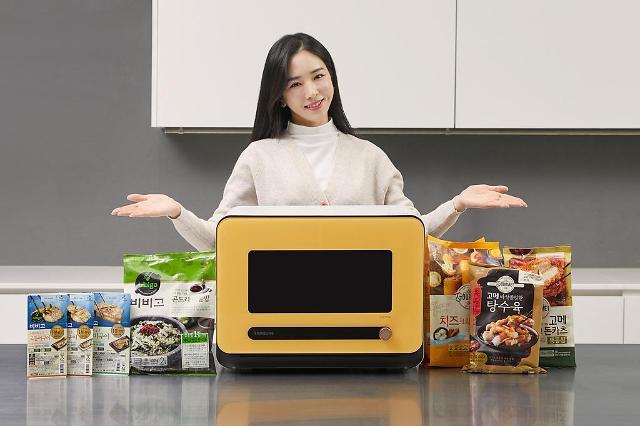 SEOUL -- Samsung Electronics has worked with CJ Cheil Jedang, the key food subsidiary of South Korea's conglomerate CJ Group, to increase the number of ready-to-cook instant food packages that can be conveniently cooked into a tasty dish using Samsung's all-in-one oven. The collaboration between the two major companies targets single households and young workers who do not have the time to cook.

In July 2021, Samsung released "Bespoke Qooker," a multi-functional oven that can be used as a microwave oven, a grill, an air fryer and a toaster. The tech giant collaborated with many food companies to release ready-to-eat meal packs, also known as home meal replacement (HMR) products, which can be easily cooked using the all-in-one cooker. When the cooker reads a barcode of a dedicated HMR product, it will select the right cooking course for the meal pack.

HMR products became popular in South Korea with some 6.6 million single households. The heat-and-eat meal packs have become even more popular during the last few years since the first wave of a coronavirus pandemic hit the country in 2020. Grounded consumers shopped online instead of visiting crowded markets and mega-stores and found meal packs easy and convenient to eat.

Samsung said in a statement on January 12 that the company collaborated with CJ Cheil Jedang to release ready-to-cook meal packages exclusive to the Bespoke oven. So far, Samsung worked with 13 food companies to release 170 kinds of Bespoke-exclusive meal packs. The tech giant said that the number of menus will increase to up to 200 by the end of this month through collaboration with CJ Cheil Jedang.

"Bespoke Qooker is opening a new chapter in South Korea's dining culture through collaboration with food companies. More consumers will fully experience the value of the product through cooperation with CJ Cheil Jedang," Park Chan-woo, vice president of Samsung's household appliances division, was quoted as saying.
© Aju Business Daily & www.ajunews.com Copyright: All materials on this site may not be reproduced, distributed, transmitted, displayed, published or broadcast without the authorization from the Aju News Corporation.