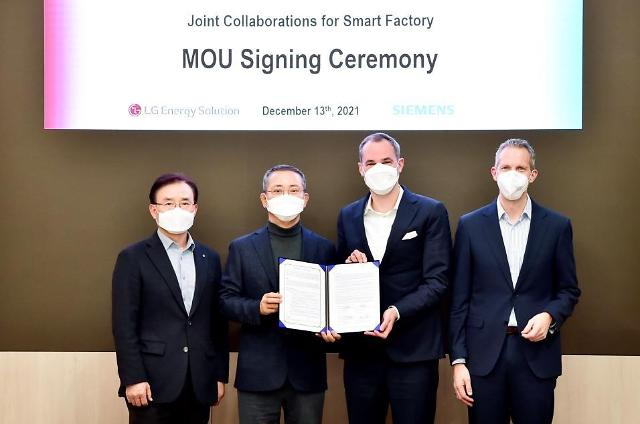 LG Energy Solution (LGES) said in a statement on December 14 that the company and its German partner signed a memorandum of understanding to collaborate in the development and commercialization of battery manufacturing intelligence. The autonomous battery-making system will be actualized at a factory that is being built by Ultium Cells. LLC, a joint venture of LGES and American carmaker General Motors (GM), in Tennessee.

Ultium has unique technology to vertically or horizontally stack batteries to fit the shape of an electric vehicle. The technology is especially useful for electric sport utility vehicles and crossover vehicles. LGES and GM's joint venture is currently building two factories, one in Ohio and another in Tennessee.

According to LGES, manufacturing intelligence is crucial in accomplishing the company's environmental, social, and corporate governance (ESG) management goal. By establishing the smart production system, the company can monitor the entire process of battery production as well as mass-producing products. ESG is a trendy corporate operation method that focuses on the use of green energy as well as reducing carbon emissions.

"We believe the partnership with the world-renown Siemens AG will efficiently promote LG Energy Solution’s digitized manufacturing processes, ultimately enabling LGES to provide the finest services to our clients," Young Soo Kwon, CEO of LGES, was quoted as saying. "With this cooperation, we underscore Siemens’ positioning as a focused technology company. Joining forces with the world’s leading battery manufacturer allows us to showcase our deep domain know-how in the battery market," Siemens AG official Cedrik Neike said.
© Aju Business Daily & www.ajunews.com Copyright: All materials on this site may not be reproduced, distributed, transmitted, displayed, published or broadcast without the authorization from the Aju News Corporation.