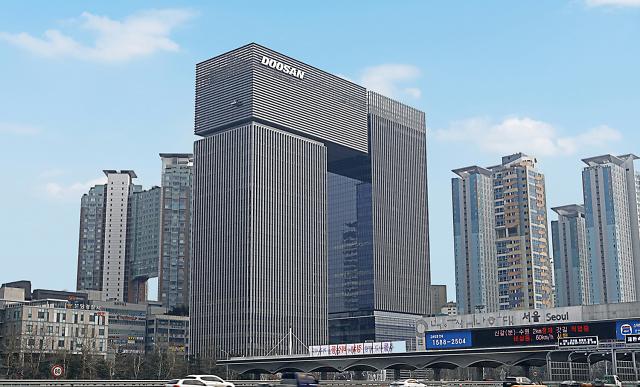 SEOUL -- Doosan Corporation, the holding company of South Korea's Doosan Group, will join a major project to demonstrate a green hydrogen production facility based on solid oxide electrolyzer cell technology that would use steam produced at a nuclear power plant in an eastern port town.

The project to create a green hydrogen production complex in Uljin some 223 kilometers (139 miles) southeast of Seoul involves the Korea Institute of Energy Research, the Korea Institute of Machinery and Materials, Seoul National University's Nuclear Energy Policy Center, and KEPCO E&C. Doosan Corporation is in charge of developing SOEC technology.

For its long-term goal, Doosan Corporation aims to utilize SOEC technology to small modular reactors (SMRs), which have been studied to address the limitations of traditional light-water reactors and allow for less on-site construction, increased containment efficiency, and enhanced safety.

"SOEC technology is more efficient than alkaline water-electrolyte or polymer electrolyte technology that has already been commercialized. We will produce a large amount of clean hydrogen by applying SOEC technology," Lee Hae-won, a Doosan Corporation official charge of hydrogen business, said in a statement on December 6.

SOEC's operating temperatures are similar to those conditions for a solid oxide fuel cell (SOFC). In September 2021, Doosan Corporation completed the development of a 10-kilowatt SOFC system with the world's highest electricity generation efficiency.

SOFC uses common gas such as hydrogen as the main source of fuel and is considered to be the most stable and power-efficient among its fuel cell brothers. Because SOFC has a high power output compared to its size, the fuel cell system is ideal for powering mega-sized heavy equipment such as oil tankers and giant tunnel boring machines.
© Aju Business Daily & www.ajunews.com Copyright: All materials on this site may not be reproduced, distributed, transmitted, displayed, published or broadcast without the authorization from the Aju News Corporation.