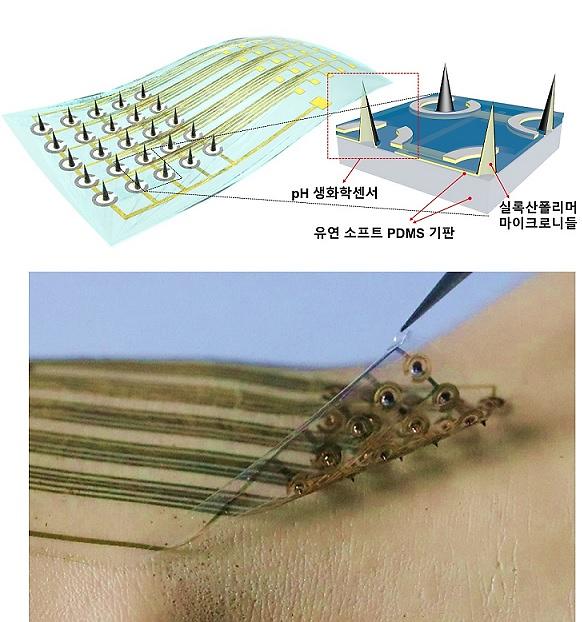 
SEOUL -- South Korean researchers have developed a flexible microneedle medical sensor platform that can diagnose peripheral artery diseases. The platform can be used in the real-time monitoring of blood-sugar levels of diabetes patients and other diseases that require the analysis of body fluids including blood.

Microneedles are widely researched for their potential as an important medical tool that allows doctors to access the inside of biological tissue such as skin from the outside without surgery. Some microneedles are created in the form of a patch to deliver medicine while others are attached to a sensor platform to measure biochemical parameters.

Microneedle-based patch-type wearable devices were created to collect sweat. Because of their non-invasive characteristics, it was hard for such wearable devices to measure the biochemical parameters of body fluids.

The Korea Advanced Institute of Science & Technology (KAIST) said in a statement on December 3 that its research team has created a sensor platform by placing microneedle sensor arrays on a flexible substrate. Polyaniline, a flexible conductive polymer compound, was deposited on needles to make them durable enough to be inserted into pigskin one thousand times. The needle patch has pH sensors to monitor the hydrogen-ion activity (acidity or alkalinity) of blood.

Researchers demonstrated the novel sensor patch by measuring pH distribution on the dermal layer of a peripheral vascular disease rat model. The patch was applied to an anesthetized rat to measure the pH profile for five hours, and researchers found that the sensor was capable of monitoring the acidity and alkalinity of the rat's blood.

KAIST researcher Bae Byeong-soo said that the microneedle sensor patch can be used in wearable devices for diagnosing peripheral artery diseases, diabetes and other metabolic diseases.