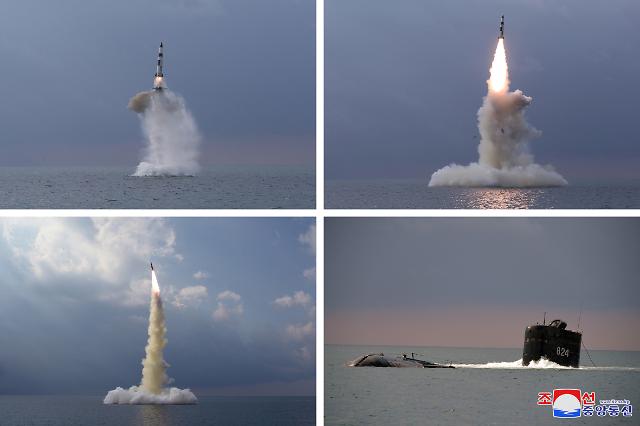 
SEOUL -- An inter-Korean missile race that intensified in 2021 shifted to an exchange of sarcastic words discounting the level of skills that the other other side has achieved. Foreign experts look more interested in why North Korea has not yet launched its true ballistic missile submarine while reasoning that the latest test of Pyongyang's submarine-launched ballistic missile was seen as a response to South Korea’s aggressive missile buildup.

The two Koreas have revealed the test firing of new missile systems one after another. North Korea has discounted South Korea's ballistic missile fired from a 3,000-ton submarine on September 15 as a "clumsy product" in the elementary stage of development and responded with its own ballistic missile launch from a 2,000-ton Sinpo-class submarine on October 19.

In a parliamentary session on October 21, South Korean Defense Minister Suh Wook evaluated the North's new SLBM as "rudimentary," casting doubt over the technology level of its ballistic missile submarine. "North Korea's SLBM launch is at a rudimentary level, and we have yet to confirm the platform itself. Meanwhile, our system is complete and combat arrangement is not far away," Suh said, hesitating to place North Korea on a list of countries with true SLBMs.

In a clearer answer to lawmakers, Foreign Minister Chung Eui-yong said South Korea's SLBM is "far superior" to North Korea's. "We believe that North Korea's SLBM's ability shown in the recent test launch can be defended with the capabilities of our military."

Based on images released by Pyongyang, experts in Seoul said North Korea's new SLBM has become smaller in size and had a sharp warhead compared to its previous version tested five years ago. "It was designed to give anomalous maneuver, not a monotonous trajectory when descending," Korea Defense and Security Forum (KODEF) analyst Shin Jong-woo said. "It seems to be intended to mount several missiles on submarines through miniaturization to hit major South Korean facilities and U.S. military bases in Japan from high seas."

If it was launched from a submarine, the North Korean SLBM would have required "some engineering modifications" as the missile appears smaller than the previously tested weapons, Beyond Parallel, the website of the Center for Strategic and International Studies (CSIS), a think tank based in Washington, said in an October 21 article published by Joseph S. Bermudez Jr., an internationally recognized analyst, and Victor Cha, senior CSIS vice president.

"This test launch should be viewed as both a response to South Korea’s recent successes with the development and launching of a new class of ballistic missile submarine and testing of an SLBM, and as a practical component of the North’s SLBM development program," the experts said, suggesting that South Korea's development and launch of new ballistic missile submarines and SLBMs have placed "considerable pressure" on North Korean leader Kim Jong-un to respond.

"The test not only provides numerous practical benefits but should also be viewed as a response to the South's recent propaganda successes, and as a means of capitalizing on any perceived weaknesses of the U.S. administration of President Biden," said Bermudez and Cha. "A pressing question on the minds of many North Korea analysts and watchers is why North Korea has not yet launched its much anticipated first true SSB (ballistic missile submarine)."

The South's SLBM is more than five years ahead of its North Korean counterpart, President Park Jong-seung of the Agency for Defense Development (ADD), a state-run defense technology research body in South Korea, said, adding North Korea's ballistic missile submarine looks to be still in the experimental stage. He placed more importance on Pyongyang's development of solid propellants. "I believe that (North Korea) will develop solid-propelled large-scale technologies rapidly to maximize the strategic operation of mid-to long-range missiles at the will of North Korea's chief executive."

Analyzing a "fuel ampoule" allegedly used for North Korea's testing of a "hypersonic missile Hwasong-8" on September 28, Vann H. Van Diepen, an independent consultant on weapons of mass destruction, said that it probably refers to loading the missile with propellants at the factory. Most likely, he said it refers to the practice of preloading the Soviet SS-N-6 SLBM and later liquid-propellant SLBMs with propellants at the factory, and of maintaining the fueled missile as a sealed unit for loading into the submarine launch tube.

"'Ampoulization' still could provide worthwhile benefits, especially for land-mobile missiles. Transporting and handling 'ampoulized' missiles would be easier and safer, especially in the field, and particularly within an enclosed launch railcar," Diepen said in an article published on October 13 by 38 North, the website of a U.S. think-tank.

"Although North Korea is almost certainly pursuing larger-diameter solid motors for future IRBMs and ICBMs and may also pursue large solid SLBMs of equivalent range, for now, all of its known IRBMs and ICBMs are liquids. Even if it does develop solid missiles of these sizes, it is highly likely to continue to pursue liquids as well, just as China and Russia continue to do," the expert said. An intermediate-range ballistic missile (IRBM) has a range of 3,000~5,500 km between a medium-range ballistic missile and an intercontinental ballistic missile (ICBM).