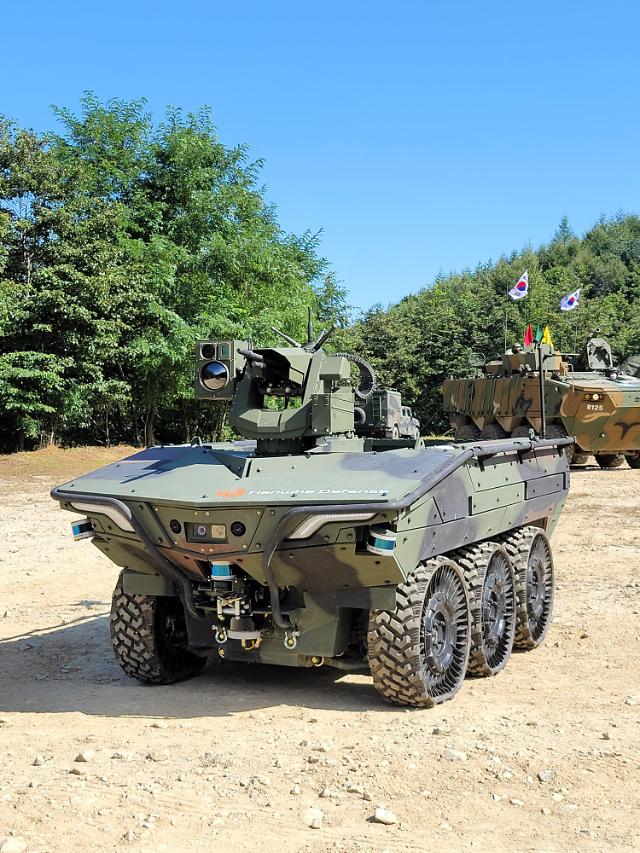 SEOUL -- South Korea's major defense contractor Hanwha Defense and an army infantry division have started the test operation of a six-wheeled multi-role unmanned ground vehicle that can carry up to 500 kilograms (1,102 pounds) of cargo and travel more than 100 kilometers (62.1 miles) per charge.

Hanwha Defense has previously showcased a multi-purpose unmanned ground vehicle (M-UGV), a four-wheeled 1.5-ton electric vehicle that can move at a top speed of 30 kilometers per hour on paved roads. The M-UGV can be controlled remotely or autonomously to carry out various missions such as surveillance, logistics transport, evacuation of casualties, and combat engagement. The six-wheeled version is a 2-ton class electric vehicle dubbed the intelligence UGV (I-UGV), unveiled in July 2021.

The South Korean defense contractor said in a statement on October 8 that the field demonstration of an I-UGV began at an army infantry division to test various abilities such as remote control, GPS-based autonomous driving, and remote-controlled weapon system (RCWS). Hanwha said I-UGV will be remotely controlled or autonomously operated in battlefields for reconnaissance missions.

Just like its smaller brother M-UGV, the I-UGV can carry out missions such as reconnaissance, communication relay, logistics transport, casualty transport, and close combat. Hanwha Defense's RCWS is an artificial intelligence-based weapon turret system. It can detect the sound of gunfire and fire back in the direction of the origin of the sound.

The remote-controllable six-wheeled I-UGV will try to reestablish its communication link with the control tower when it loses the radio signal. If it fails to re-link with the control tower, the I-UGV will autonomously return to its starting point. "Hanwha Defense's I-UGV is the world's top-class autonomous vehicle solution that reflects technology trends of the world's rapidly growing autonomous vehicle market," Hanwha Defense's autonomous solution business team manager Chun Yung-jin was quoted as saying.