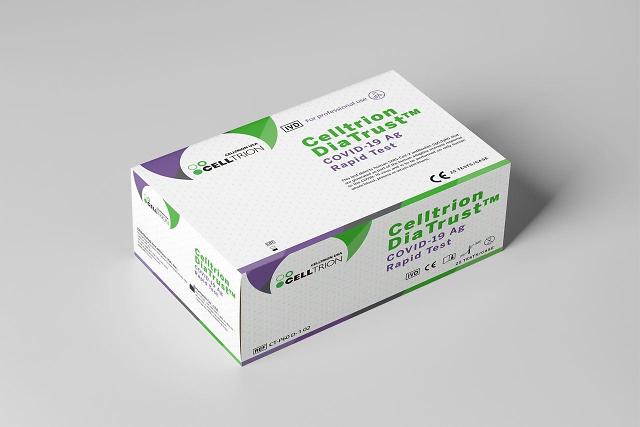 
SEOUL -- Celltrion's COVID-19 rapid antigen test kit capable of yielding results in 15 minutes without additional equipment has been selected by a U.S. combat support agency under the Department of Defense for deliveries to about 25,000 locations such as military bases, long-term care facilities, community testing sites, critical infrastructure, and other designated places.

The U.S. subsidiary of Celltrion, a leading biotech company in South Korea, has secured a procurement contract from the Defense Logistics Agency (DLA). Celltrion said the order volume was estimated at as much as $626 million considering the change in demand. Deliveries will be made on a weekly basis as early as October 1.

Celltrion and Humasis, an in vitro diagnostic medical device manufacturer, have jointly developed the rapid test kit named "DiaTrustTM" that applied two antibodies binding COVD-19 virus to both N-protein and S-protein respectively, resulting in improved sensitivity of 93.3 percent and specificity of 99 percent.

"The fact that we were awarded a procurement contract by the DLA after having passed its strict screen process is a recognition of Celltrion’s technology and supply capability," Celltrion USA CEO Kim Bong-joong said in a statement on September 23.

Celltrion said the quality and safety of DiaTrustTM has been proven by as the product obtained Emergency Use Authorization (EUA) from the Food and Drug Administration (FDA) on April 16. For its DLA deal, the company would deliver point-of-care tests (POCT) which can only be used in the presence of medical professionals.