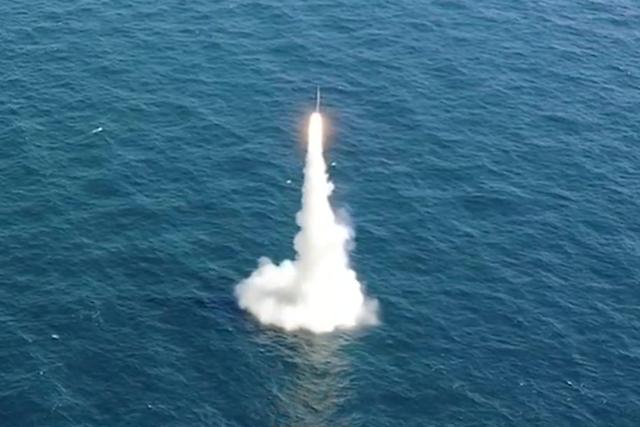 This photo released by South Korea's Defense Ministry shows a ballistic missile being fired from a submarine in a test launch on September 15. [Yonhap News photo]


SEOUL -- In a show of fast technological advancement in strategic weapons that are certain to pose a clear threat to neighboring countries, the two Koreas, which are still technically at war across the world's last Cold War frontier, have revealed the test firing of new missile systems one after another at a time when a confrontation between their superpower allies, China and the United States, becomes conspicuous.

Global attention was paid to the Korean peninsula on September 15 when South Korean President Moon Jae-in observed the test launch of a ballistic missile from a 3,000-ton submarine at the test center run by the Agency for Defense Development (ADD), a state-run defense technology research body in the central city of Daejeon. South Korea's SLBM was based on a Hyunmoo-2B ballistic missile that can fly over 500 kilometers (310 miles).

"Today, we have strengthened our self-defense capabilities that no one can shake with the successful test of SLBM and other missiles," Moon said in a statement, which was published hours after North Korea test-fired two short-range ballistic missiles from an inland base that flew around 800 km before landing in the sea. South Korea's SLBM launch was possible after Washington lifted restrictions on missile development at summit talks between U.S. and South Korean leaders in May 2021. 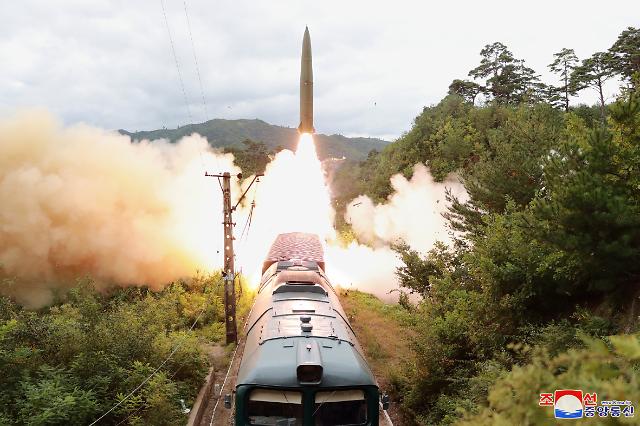 
A day later, Pyongyang's state media released photos showing a ballistic missile being fired from a train that stopped in front of a tunnel. The railway-driven missile system is a method of laying a launchpad horizontally in the train compartment and erecting it vertically at the launch site. The North's official Korean Central News Agency (KCNA) said the test was aimed at confirming the "practicality of a railway-borne missile system."

South Korean military officials suggested that North Korea appeared to have developed a railway-driven launch system for the KN-23 Iskander ballistic missile, which has demonstrated a "pull-up" maneuver over the course of its flight to avoid interception.

The test launch of two short-range missiles came days after North Korea tested a new long-range cruise missile that allegedly traveled for 7,580 seconds along an oval and figure-eight flight track and hit targets 1,500 km away, sparking a flurry of analysis in South Korea. The North Korean missile was compared to South Korea's Hyunmoo-3C cruise missile powered by a turbofan engine that can strike its target up to 1,500 km away and carry a maximum payload of 500 kg of conventional explosive.

In an effort to dispel public concerns over North Korean missile threats, the South's defense ministry took premeditated action to belatedly admit that it has developed a supersonic cruise missile that is overwhelmingly faster than its North Korean counterpart. "It is expected to be a key force to respond more practically to forces approaching our territorial waters," the ministry said in a statement.

Video clips also showed the destructive power of a new ballistic missile with a big and powerful warhead. "The missile developed this time can hit concrete buildings and underground mines, and it can neutralize major targets by hitting them accurately and strongly," the defense ministry said. There have been unconfirmed news reports that South Koreas is developing missiles with a warhead weight of up to three tons.

The two Koreas have been locked in a race to develop and produce various missiles, with North Korea taking the upper hand in extending the range of missiles. South Korea has focused on guided systems and missiles with precision strikes. Pyongyang followed suit after working hard to extend the range of ballistic missiles.

The North Korean cruise missile resembling the US Tomahawk and other foreign long-range cruise missiles is probably for land attack and intended to carry a conventional payload, either exclusively or in addition to a nuclear one, according to Vann H. Van Diepen, an independent consultant who served 34 years in the US government on issues related to weapons of mass destruction.

However, it is unknown whether North Korea has yet developed a nuclear warhead small enough in diameter to fit the apparent size class of its cruise missile, Diepen said in an article published by 38 North, the website of a U.S. think-tank, based on state media reports. He said that North Korea probably gained access to turbofan technology by acquiring Russian Kh-35 anti-ship cruise missiles some years before the deployment in 2014 of its own apparent spin-off.

The advent of North Korea's land-attack cruise missile (LACM) marks "a new indication that an arms race between North and South Korea was heating up on the Korean Peninsula," part of a "tit-for-tat weapons buildup," Diepen said. It's not known yet if North Korea's cruise missile will end up being deployed, or in what numbers and on what platforms, but a force of 1,500 km range LACMs could augment the ballistic missile force in several useful ways, the expert said.

Diepen said that LACMs could be carried on many more submarines than ballistic missiles, which require purpose-built or modified submarines, assuming it is small enough to be launched from a torpedo tube. He said that North Korea has the option of developing an anti-ship version, although it would have to overcome the challenges of obtaining sufficient long-range targeting data -- especially during wartime.