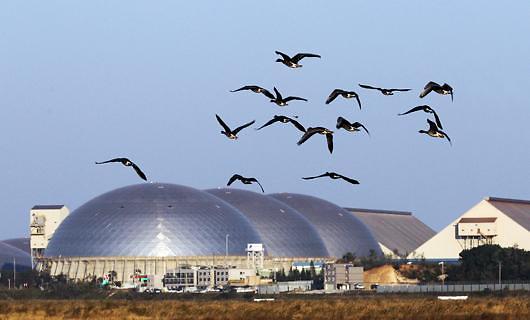 
SEOUL -- Two major steel companies in South Korea will replace quicklime with powder made by processing shellfish and oyster shells that have been an environmental issue due to a huge accumulation of waste mainly along the southern coast. South Korea is one of Asia's biggest oyster farming countries.

Adding quicklime in the process of sintering iron ore for furnace injection can improve productivity and reduce fuel costs. POSCO and Hyundai Steel, affiliated with South Korea's Hyundai auto group, would replace raw lime with shell pieces that can reduce the discharge of air pollutants from steel mills.

POSCO said in a statement on September 16 that the use of shell powder was possible after the environmental evaluation of shell recycling, submitted by a domestic shell processing company based in the southern port city of Yeosu, acquired approval from the National Institute of Environmental Research (NIER).

Limestone has been used in the process of removing impurities such as sulfur and phosphorus. from iron. POSCO Chemical, a leading company in coal chemistry and carbon materials, has been developing a technology that uses shells instead of limestone to manufacture quicklime.

According to the Ministry of Oceans and Fisheries, a huge amount of oyster and shellfish waste has been left unattended every year. Oysters are considered to be the most important molluscan shellfish in South Korea's aquaculture industry. The management of oyster shell disposal standing at about 300,000 tons every year is an ongoing challenge.