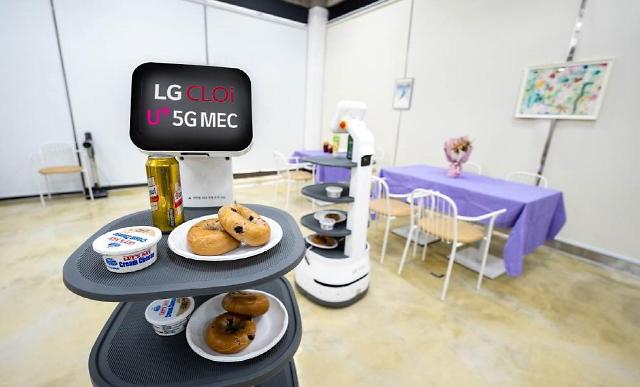 
SEOUL -- LG Electronics and LG Uplus have demonstrated the stable autonomous driving of a robot utilizing mobile edge computing and a 5G core network based on a cloud system from Amazon Web Services (AWS). The robot generated maps based on the surrounding environment such as walls and entrances and avoided moving obstacles.

Through their demonstration at an LG R&D center in Seoul, LG Uplus (LGU+), a mobile carrier, and LG Electronics would try to commercialize 5G cloud (brainless) robots that can lower prices and power consumption for diversified tasks such as delivery, quarantine and guidance. Mobile edge computing (MEC) enables cloud computing capabilities and an IT service environment at the edge of cellular networks.

"We confirmed that multi-robot cluster control and stable driving are possible while reducing the amount of computation in robots using cloud computing," LG Electronics' robot research center head Baek Seung-min said in a statement on September 14. "We hope robot automation solutions using 5G networks can be developed and applied to smart factories and commercial service robots."

LG Electronics has developed various service robots such as CLOi, an artificial intelligence-based autonomous service robot. In July 2021, the company unveiled a four-wheeled delivery robot that can adjust the gap between its wheels, actively respond to terrain changes, and move with less vibration when it encounters raised spots or uneven roads.

The cloud robot was equipped with a 5G SA industrial terminal developed by LG Electronics. Large-capacity images sent by the robot were transmitted to the MEC platform in real-time. Through cluster control algorithms, a number of robots were controlled for cooperative work.

To provide stable 5G network quality with enhanced security to corporate customers, robots were demonstrated in a built-in private MEC that integrated core networks and services. LG U+ thinks the combination of MEC and robots will be introduced in various places such as hospitals, hotels and restaurants.