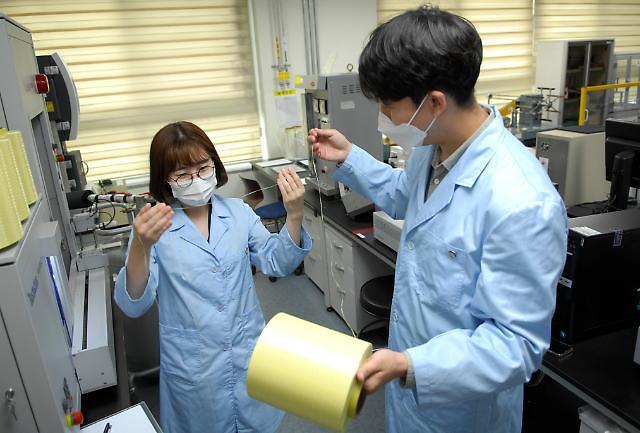 SEOUL -- Kolon Industries, a chemical and textile manufacturing company in South Korea, will invest 236.9 billion won ($ 202.9 million) to double the production capacity of aramid fiber that would be used mainly for 5G communication cables and tires for electric vehicles.

Aramid is a lightweight, highly durable synthetic material that is created in a form of fiber. Aramid fabric is about five times stronger than steel. Due to its high durability and heat resistant characteristics, the ultra-tough material is widely used in the production of military gear and optical cables. The global aramid fiber market is growing at an average annual growth of about 8.3 percent.

Kolon Industries said in a statement on August 25 that the company has signed a memorandum of understanding with Gumi City and the Gyeongbuk Provincial Government to upgrade the textile company's production line of an aramid fiber factory in the industrial city some 200 kilometers (124 miles) southeast of Seoul.

The company will beef up its production capability from the current 7,500 tons per year to 15,000 tons per year by 2023. A total of 236.9 billion won, including funds from local governments, will be invested. The global aramid fiber market is projected to reach $1.4 billion in 2027, according to global market research firm Grand View Research.

"Our company is making mid-to-long-term investments into the aramid fiber market. We will focus on the development of communication cables for 5G networks and tires for electric vehicles," Kolon Industries PR team manager Choi Min-soo told Aju Business Daily. He said that Kolon's Heracron product is one of the world's top-tier aramid products. The company produced prototype aramid products in 2003 and launched the Heracron brand two years later.
© Aju Business Daily & www.ajunews.com Copyright: All materials on this site may not be reproduced, distributed, transmitted, displayed, published or broadcast without the authorization from the Aju News Corporation.