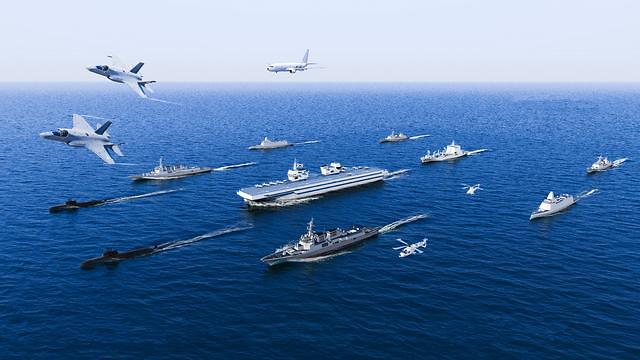 The Defense Ministry has unveiled the so-called CVX project to build a 30,000-ton light aircraft carrier manned by more than 400 crew members. Some 2.33 trillion won ($2.09 billion) will be spent from 2022 to 2033 only on basic design and construction, although it requires extra expenses to purchase weapons, aircraft and other equipment.

Daewoo Shipbuilding & Marine Engineering (DSME) and Hanjin Heavy Industries & Construction signed a memorandum of understanding on August 19 to design and construct an aircraft carrier. "We will do our best to successfully carry out the light aircraft carrier project required by the Navy by utilizing the excellent technology of DSME and the experience of Hanjin Heavy Industries," DSME's special ship marketing division head Jung Woo-sung said in a statement.

DSME took an aggressive approach to win the aircraft project by carrying out independent conceptual and signed a contract with Fincantieri, a shipbuilding company in Italy, on technical support and research cooperation. Hanjin Heavy has delivered two 14,500-ton amphibious assault ships in 2007 and this year.

In June, South Korea's navy commissioned the second amphibious assault ship named "Marado" which is 199 meters long and can sail at a maximum speed of 42 kilometers (26 miles) per hour. It is capable of carrying some 700 marines along with tanks, armored personnel carriers and hovercrafts in the lower deck and helicopters on the top deck.

To cope with an ever-growing arms race in Northeast Asia, South Korea has envisioned a smart navy because it's not able to gain a quantitative advantage over its neighboring countries. South Korea's naval buildup program is basically aimed at keeping North Korea in check. However, military leaders now openly talk about a naval fleet covering the ocean beyond coastal waters, based on accumulated technical skills in the fields of missiles, warships and electronic equipment.