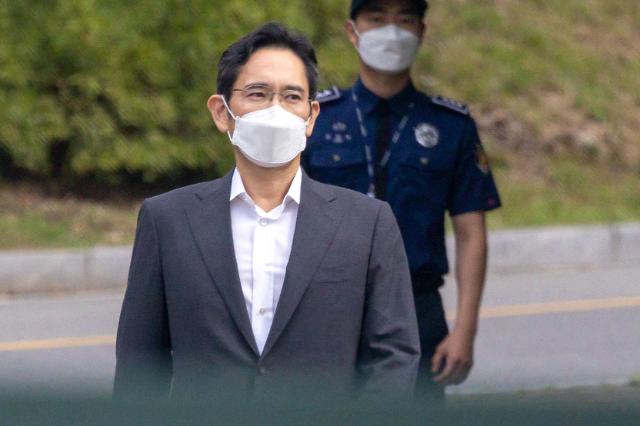 SEOUL -- The de facto leader of South Korea's top conglomerate, Samsung, bowed his head and apologized for causing public concern as he walked out of jail detention on parole, ending his prison life for 207 days on bribery charges stemming from a corruption scandal involving jailed ex-president Park Geun-hye.

"I've caused great concern to my fellow citizens. I am really sorry," Samsung Electronics Vice Chairman Jay Y. Lee said, deeply bowing his head before a wall of journalists after the 53-year-old stepped out of the main gates of the Seoul Detention Center in Uiwang about 25 kilometers (15 miles) south of Seoul. "I am well aware of the worries, criticism, concerns and big hopes about me. I will do my best."

Looking emaciated, but with sharp eyes, Lee shrugged away a barrage of questions and quietly walked to a nearby black luxury sedan. He underwent appendicitis surgery during his seven-month imprisonment.

Outside the detention center, policemen have formed a human barrier to prevent violence by dozens of people who were split into two groups and sometimes engaged in a quarrel, inviting warnings from policemen. Supporters chanted Lee's name and waved placards as Lee, clad in a black suit and a tieless white shirt, slowly walked down the sidewalk that leads to the main gates.

Lee's release sparked an outcry from civic groups which blasted President Moon Jae-in for throwing aside the value of justice and equity to give preferential treatment to the head of South Korea's top conglomerate. Moon defended his decision as an inevitable choice for South Korea's national interests amid a "severe" crisis caused by a COVID-19 pandemic.

"I hope that the public will understand that it is a choice for our national interest," Moon said through his spokesperson soon after Lee was released from the detention center. "I am well aware that there are pros and cons." "Amid a severe crisis, many people demand parole, looking forward to (Lee's) role especially in the fields of semiconductor and vaccines."

South Korea's business community has expressed concern about Samsung's leadership vacuum as Samsung is at a critical juncture to head off the fierce competition with foreign rivals and make crucial decisions on pending issues such as the proposed construction of a $17 billion foundry fab in the United States. Samsung has yet to decide its location on the U.S. chip plant.

Lee was released from prison in February 2018, when the appeals court sentenced him to two years and six months in prison with a stay of execution for four years, reversing the lower court's ruling that bribes were used to ensure the smooth transfer of group leadership. However, the supreme court ordered retrial in August 2019. Lee was sent back to jail again on January 18.

The corruption scandal involving Park and her crony fanned public sentiment against corporate donations, which have long been a controversial issue in South Korea due to concern about collusive ties between businessmen and politicians. Park was accused of abusing her status and power to solicit bribes from top conglomerates, although she claimed businessmen have voluntarily donated money.