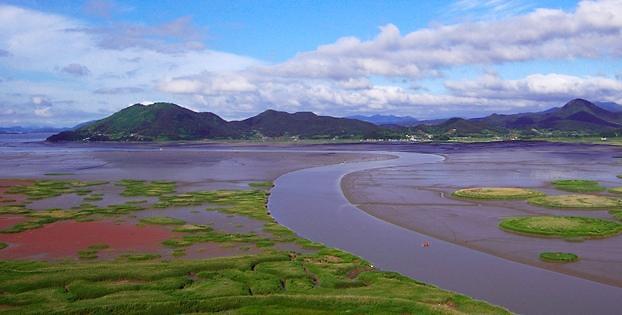 SEOUL -- Blue carbon is the term for carbon captured by ocean and coastal ecosystems. Seagrasses, mangroves, and salt marshes capture carbon, acting as a carbon sink. Most of the carbon taken up by these coastal ecosystems is stored below ground. Protecting and restoring coastal habitats is a good way to reduce climate change.

A research team led by Khim Jong-seong, a professor in Seoul National University's school of earth and environmental sciences, found that tidal flats in the southwest of the Korean peninsula hold about 13 million tons of carbon and absorb 260,000 tons of carbon dioxide annually, according to the Ministry of Oceans and Fisheries.

It is the world's first national study to investigate the ability of mudflats to absorb carbon dioxide, the ministry said in a statement on July 6. "It is encouraging that South Korea has scientifically proven the role of mudflats for the first time in the world as part of global efforts to cope with climate change," Khim was quoted as saying.

Khim said his team would carry out more research so that mudflat blue carbon can be recognized as a carbon reduction source. The ministry pledged support for the creation of salt plants on mudflats. "This study confirms that Korean mudflats, one of the world's top fives, have value as a carbon sink," said Song Sang-geun, a ministry official in charge of maritime policy.