S. Korea lifts ban on outdoor concert halls to have up to 4,000 audience 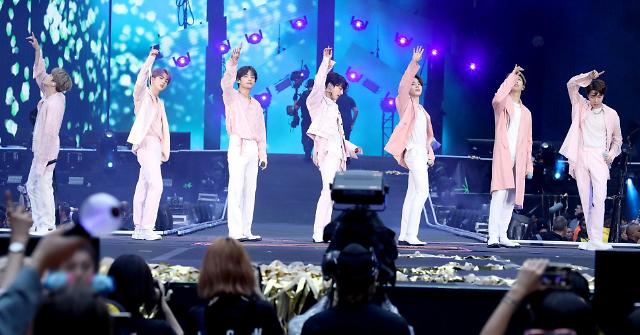 
SEOUL -- South Korea lifted a ban on outdoor pop concerts about 14 months after a coronavirus pandemic sparked a strict social distancing campaign and sent many K-pop artists staying away from fans. Only a small number of artists like BTS have been engaged in intermittent musical activities through online concerts.

From June 14, South Korean artists can invite up to 4,000 quiet fans to offline concerts because shouting or slogan chanting is banned. Health authorities pledged to ease restrictions gradually or faster if vaccination gains in speed.

So far, the government has restricted gatherings of more than 50 people to prevent the spread of COVID-19. Music concerts, which were difficult to get permissions, have been allowed to have less than 100 fans who should sit in designated seats positioned at least two meters apart from one another.

South Korea's epidemic control tower unveiled revised quarantine rules on June 11. Pop music concert venues will be allowed to have up to 4,000 fans. Seats at concert halls should be positioned one meter apart and all the audience should not take off masks. Eating or drinking is prohibited.

The government's move is certain to provide a breather for South Korea's troubled music industry. Many event operators have canceled concerts with small-sized concert halls forced to shut down. Financial losses in the domestic pop music performance industry were estimated at about 184 billion won ($165 million) from February 2020 to May 2021.

Artists had to seek new ways to make a living. However, BTS was an exceptional case and attracted more than one million paid viewers worldwide just through two online concerts in 2020. Other top K-pop artists including BLACKPINK also held online concerts.
© Aju Business Daily & www.ajunews.com Copyright: All materials on this site may not be reproduced, distributed, transmitted, displayed, published or broadcast without the authorization from the Aju News Corporation.