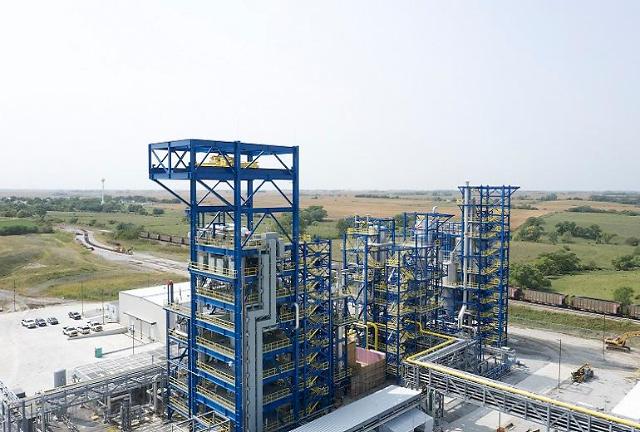 
SEOUL -- The holding company of South Korea's third-largest conglomerate, SK Group, has made a strategic investment in an American turquoise hydrogen company to beef up clean energy capabilities. The group has launched a task force involving group units to establish a hydrogen value chain.

Blue hydrogen is produced by applying carbon capture and storage to reduce CO2 emissions. Green hydrogen can be produced through electrolysis, a process of passing an electrical current through an electrolyzer to split water and release only hydrogen and oxygen.

Turquoise hydrogen that sits somewhat between blue and green hydrogen uses methane as a feedstock, but the process is driven by heat produced with electricity instead of fossil fuels. Methane pyrolysis produces hydrogen and a solid carbon material called "carbon black" that can even be used in other applications. Monolith has developed a process technology that converts natural gas into clean hydrogen and carbon black.

As a leading investor, SK Holdings said it has secured a seat on Monolith's board of directors, but financial details were not disclosed. Monolith also attracted investments from Nextera, a major American renewable energy company. "Through this investment, SK Holdings has acquired core technology for the commercialization of clean hydrogen production," an unnamed SK Holdings official said in a statement on June 3.

The group would build a plant capable of producing 30,000 tons of liquefied hydrogen per year from 2023. SK E&S will produce 250,000 tons of blue hydrogen from 2025. In January, SK Holdings made a $1.5 billion equity investment in Plug Power, an American company that provides hydrogen fuel cell turnkey solutions and operates a hydrogen highway across North America. Through a joint venture, they aim to build a production base and supply fuel cells and hydroelectric facilities to South Korea and other Asian countries.