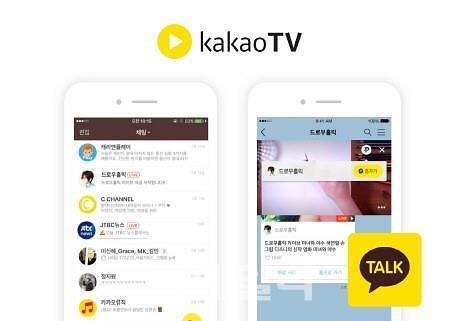 SEOUL -- South Korea's web service company Kakao will shut down the profit-making system of its personal streaming service to focus on media businesses including the production of original video content. The strategy to narrow its focus in the media content sector benchmarks that of Netflix, the American over-the-top service operator which has become the world's most popular media with endless waves of high-quality original content.

A personal streaming service is provided via online video platforms. Each user called "creator" produces content that is broadcast live while interacting with audience through chats. Creators receive donations from viewers or broadcasting advertisements and share their profit with platform operators. Twitch and YouTube are the world's top two most popular personal streaming service operators.

Kakao TV, the personal streaming service wing of Kakao, said it would shut down its donation and profit-sharing service in July. Creators will be allowed to keep on broadcasting their content, but they cannot make a profit any longer. "We have been working since the second half of 2020 to go through our step-by-step transformation into a video content service that offers original content similar to those offered by TV channels and cable TV services," Kakao TV said in a statement on May 31.

The personally-created content market was formed in South Korea in 2007 when Kakao's predecessor, Daum, launched a user-created content (UCC) campaign to encourage ordinary folks to generate and share self-produced video content. Daum was merged into Kakao Corp, a smartphone messenger app company in 2014.

UCC was transformed to personal streaming in the late 2000s when domestic personal broadcasting platforms such as Afreeca TV and Daum Pot TV garnered popularity. The one-man broadcasting industry grew rapidly in the late 2010s when foreign platforms YouTube and Twitch became popular. There are about 50,000 South Korean creators active on YouTube.