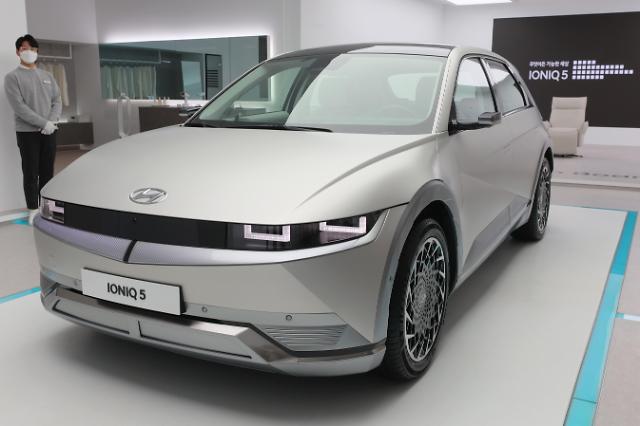 
SEOUL -- To enhance competitiveness in the electric vehicle market, South Korea's Hyundai auto group will demonstrate vehicle-to-grid technology on the southern resort island of Jeju. A V2G system draws electricity from a car's battery to power a home grid. It can simply save electricity costs and is used in disastrous situations such as a power cut induced by a heavy snowstorm.

V2G or vehicle-to-building (V2B) power systems can stably supply days of electricity to a local grid or home using an EV. They are an effective solution for those using an electricity plan that offers cheaper rates late at night. Users can charge EVs at night when the fee is cheaper and power homes at day time. Hydrogen fuel cell vehicles are virtually a power generating facility on wheels and can supply electricity more stably.

Ioniq 5, a battery-powered compact sport urban utility (SUV) released by Hyundai Motor in 2021, and EV6, a Kia electric sedan scheduled for release in late 2021, have the vehicle-to-load (V2L) capability that can provide power to a local grid or a power system. V2L can be used to directly plug electric appliances into an electric vehicle for outdoor activities such as camping.

The carmaking group said in a statement on May 7 that Hyundai Motor, Kia, and Hyundai Capital signed a memorandum of understanding with the Jeju provincial government to cooperate in the demonstration of a V2G system.

While Hyundai and Kia focus on the development of a battery-powered local grid system, Jeju will manage the electricity fee of its provincial building using Ioniq 5 vehicles. Hyundai Capital will expand an EV charging system and a long-term rent-a-car service in the resort island.

"We will introduce a new way to utilize an electric vehicle," Hyundai's senior vice president Kim Heung-soo was quoted as saying. He said V2G and V2B systems would create extra profits for customers by saving money and provide power in cases of emergency.