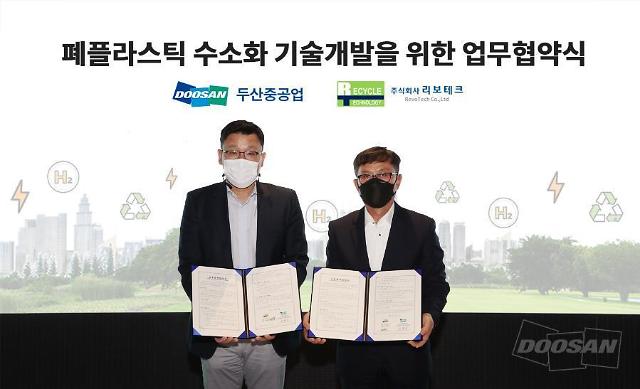 SEOUL -- Doosan Heavy Industries & Construction, a key player in South Korea's nuclear power industry, has teamed up with Revo Tech, a company specializing in the continuous pyrolysis of waste plastic, to develop and commercialize a technology that uses waste plastic for the production of hydrogen.

Pyrolysis is a chemical recycling process that can convert plastics into high-quality oil. Chemical recycling is an attractive way to address the explosive growth of plastic waste and disposal problems. To build a plastic virtuous cycle economy, South Korea has emphasized processing technology to use pyrolysis oil extracted from waste plastic as a raw material for plastic products.

Revo Tech will produce gas through continuous pyrolysis that uses the continuous input of raw materials to expand the scale of processing and secure economic feasibility. Doosan Heavy will develop facilities and processes to convert pyrolysis gas into hydrogen.

In a demonstration task, Doosan Heavy would install a hydrogen reformer capable of producing about 300 kilograms of hydrogen a day by 2021 at Revo Tech's plant in Mungyeong, about 140 kilometers (87 miles) southeast of Seoul. The "reforming" process increases quality by changing the hydrocarbon structure through heat or catalyst action.

Afterward, the two companies would commercialize technology that can produce more than three tons of hydrogen per day from waste plastic. "The hydrogenation of waste plastic contributes to resource circulation and carbon neutrality, and hydrogen produced can be used for fuel cells, hydrogen turbines and others," Doosan Heavy vice president Song Yong-jin said in a statement on May 6.

South Korean companies have tried to develop a green technology capable of chemically recycling waste plastic and produce naphtha based on pyrolysis oil, sometimes known as bio-crude, which is a synthetic fuel obtained by heating dried biomass without oxygen.

Doosan Heavy is involved in the construction of South Korea's first demonstration plant in the southern industrial city of Changwon by 2022 to use city gas for the production of liquefied hydrogen that requires cooling to a temperature of minus 253 degrees Celsius and subsequent storage in cryogenic containers. The advantage of liquefied hydrogen is its high density compared to compressed gas, which means that more energy can be contained in a given volume for easy transportation.