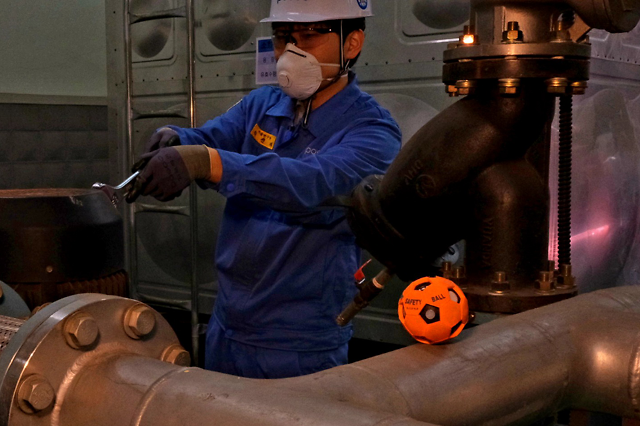 SEOUL -- For the first time in the world, South Korea's top steel group POSCO has developed a waterproof smart ball sensor that can be thrown into an enclosed space such as the interior of an empty fuel tank to instantly detect harmful gases. The tennis ball-sized sensor can communicate with portable devices like tablet PCs.

The conventional gas-detecting process has been manual with workers measuring the air quality of a confined space using a special probe. Sometimes, workers get caught up in an accident because of undetected gas. Five workers were wounded after they inhaled residual gas inside an empty liquid nitrogen tank in Pyeongtaek some 60 kilometers (37 miles) south of Seoul on April 20.

POSCO said in a statement on April 21 that the company has partnered with Handong University and Node Talks, a wireless sensor communication technology company, to develop a ball-shaped gas sensor called "Smart Safety Ball." The steel group said the sensor is the world's first of its kind. 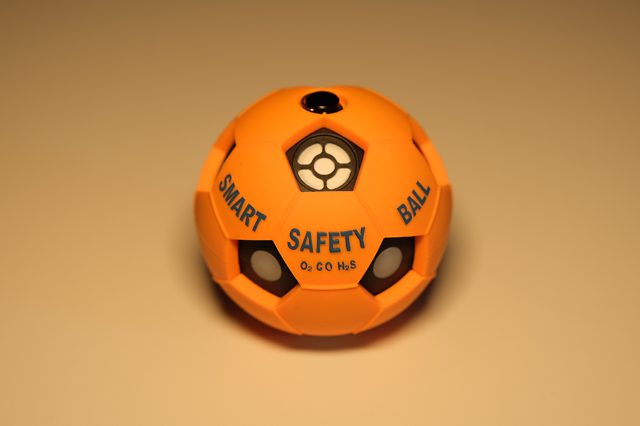 
The ball with a diameter of 60 millimeters (2.3 inches) weighs only 100 grams (0.2 pounds). It can detect the saturation level of three types of gases -- oxygen, carbon monoxide, and hydrogen sulfide -- and instantly send results to smartphones or tablet PCs. It has a maximum communication range of 100 meters in an open area while the maximum range drops to 30 m in an enclosed space.

The sensor has a built-in magnet so it can be attached to metal structures such as a pipe or a metal plate on the wall. The device's battery lasts up to two years. It is specially designed to have center-of-weight characteristics similar to that of a roly-poly, a children's toy that always sits upright, for better gas detection. It can also be attached to a rope for easy retrieval.

The steelmaker said that tests for commercial use were finished in March 2021. It will be used at steel mills and factories after POSCO won government approval in the first half of this year.