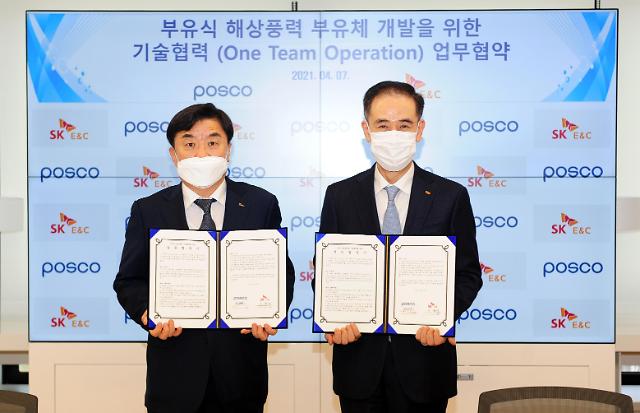 A floating structure for offshore wind power generation must provide enough buoyance to support the weight of turbines. Floating platforms introduce a new design paradigm to reduce the weight and cost of companion systems and overcome technical challenges so that they can be deployed in a wide range of site conditions.

SK E&C and POSCO signed a memorandum of understanding on technical cooperation to carry out basic design, water tank experiment, prototyping and demonstration. They would complete a competitive supply chain, while SK E&C would conduct a demonstration test in 2023.

"This agreement will serve as an important opportunity for both companies to establish themselves as a leader in the commercialization of a Korean-style floating model," SK E&C's eco-energy division head Lee Hyeong-won said in a statement on April 8.

The Seoul government has called for the localization of technologies related to floating offshore wind farms by 2025. SK E&C is involved in wind farm projects in South Korea, which has pushed for the wider introduction of wind power to reduce the use of fossil and nuclear energy.

South Korea is emerging as an Asian hotbed of offshore wind farm construction that has attracted foreign companies. In November 2020, Orsted, a Danish power company involved in major offshore wind power projects in the world, unveiled a project to establish an offshore wind power complex with a potential capacity of up to 1.6GW near Kurop Island off the coast of Incheon, a port city west of Seoul..