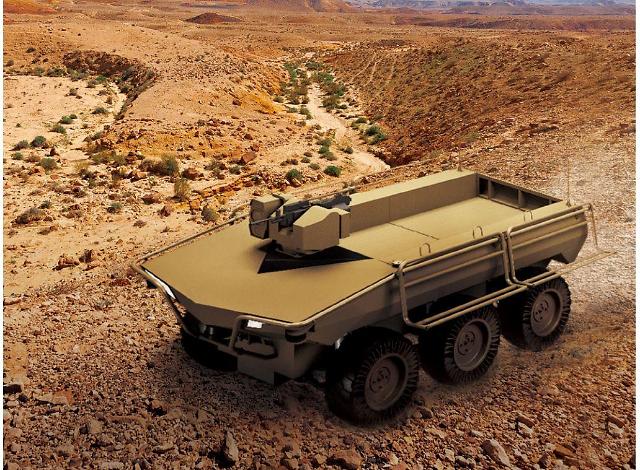 SEOUL -- Hanwha Defense, a defense contractor affiliated with South Korea's Hanwha conglomerate, has upgraded its multi-purpose unmanned ground vehicle for overseas sales. The artificial intelligence-based model featuring an autonomous return function was selected for a military test operation in the second half of this year to check its performance, operational convenience and tactical operability.

The prototype to be unveiled in July is a six-wheeled platform that strengthened export competitiveness by improving the maximum speed, load weight and range of the previous unmanned ground vehicle (UGV) capable of carrying supplies, searching battlefields, evacuating patients, and launching strikes.

Hanwha Defense has developed UGVs to improve the viability and combat capability of infantry units. Dones and a portable control system can be used to remotely conduct search and reconnaissance missions. 5G remote self-driving communication technology has been applied to unmanned systems.

Hanwha Defense said in a statement on March 31 that the upgraded model was developed for both military and commercial use. Auxiliary communication using a commercial network is possible, allowing remote autonomous driving and large-capacity data handling in mountainous terrain. The new system can return to its starting point when communication is lost and its attempt to restore communication for one minute fails.

The previous four-wheeled UGV was equipped with a K3 light machine gun and an electro-optical infrared system featuring a day-light and uncooled thermal camera. The vehicle can run at a maximum speed of 20 kilometers (12 miles) per hour and negotiate a maximum gradient climb of 60 percent and a slide slope of 30 percent.

The new model's maximum loading weight was more than doubled. The range that can be driven by a single charge is far longer. The maximum speed is 40 km per hour on paved roads and 20 km on non-paved roads. the communication distance is 1.5km or more. It can carry a 5.56 mm gun with an option of 7.62 mm or 12.7 mm.