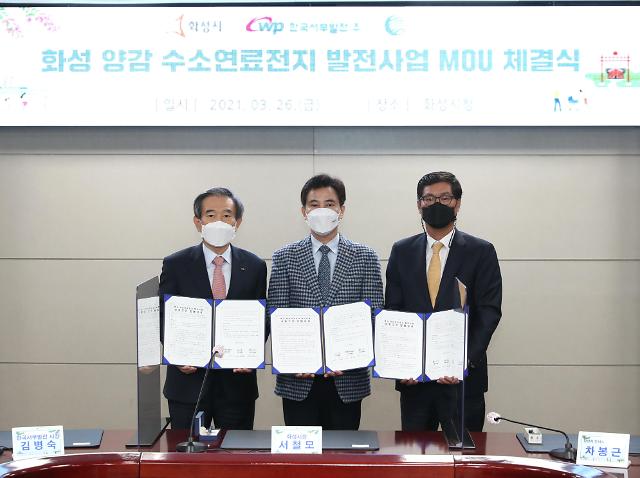 
SEOUL -- An eco-friendly power station based on hydrogen gas will be built by 2024 in a southwestern satellite city of Hwaseong. The 80-megawatt plant can supply electricity to about 185,000 households.

Hwaseong City, some 30 kilometers (18.6 miles) southwest of Seoul, said that it signed a related business agreement on March 26 with Korea Western Power, a subsidiary of South Korea's state electric utility KEPCO, and Samchully, a fuel gas manufacturing and piping company.

The city government will provide land, while Korea Western Power will build a power plant. Samchully is in charge of city gas. Korea Western Power will pay half of the total cost estimated at 545 billion won ($482 million), and the rest will be covered by a special purpose company. A civic fund will be introduced so that citizens can participate in the project and share the benefits of hydrogen generation.

In January, a facility to demonstrate hydrogen power generation using fuel cells opened in the southeastern industrial city of Ulsan, which is pushing for a value chain to popularize fuel cell cars, heavy-duty trucks, construction equipment, trains and ships. The 1MW facility capable of supplying electricity to about 2,000 households was built on the complex of a power station.