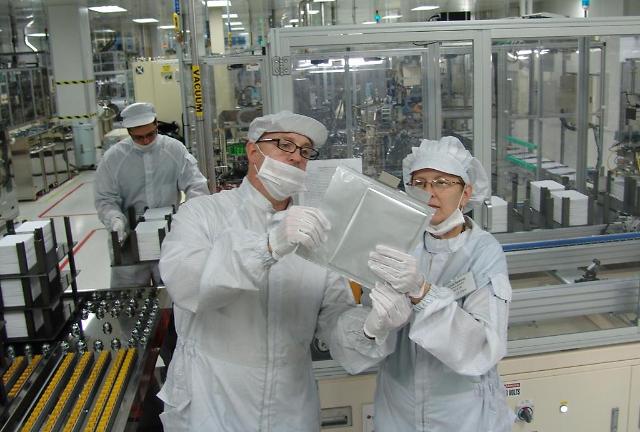 SEOUL -- LG Energy Solution, the battery-making wing of South Korea's LG Group, unveiled a new investment of more than five trillion won ($4.42 billion) by 2025 to raise production capabilities in the United States. A separate investment will be decided by the end of June to build a second joint venture plant with General Motors.

It marked the battery company's first major investment since LG Energy Solution made its official debut as a separate entity in December 2020. The company aims to secure an independent production capacity of more than 70gigawatt hours (GWh) in the U.S. alone. LG Energy Solution has a 5GWh plant in Michigan with its 35GWh joint venture plant with GM under construction in Ohio.

The battery company will focus on establishing a stable supply chain system in the U.S. including the procurement of raw materials. All new plants in the U.S. will be operated with renewable energy. LG Energy Solution runs battery plants in South Korea, Europe, China and North America, based on a stable supply network of raw materials through companies in Australia and other countries.

"The U.S. Green New Deal policy will accelerate the growth of electric vehicle and ESS (energy storage system) markets." LGES CEO Kim Jong Hyun said. "We will contribute to the success of the U.S. Green New Deal as the best partner in the U.S. electric vehicle and ESS market by securing battery production capacity first and establishing a stable localized supply chain system from R&D to production."

The LG Group aims to nurture its battery-making wing as a leading player in the global battery market through a steady injection of capital for pre-emptive facility investment and technical development. Battery makers have been locked in a fierce battle to expand their share in the global market. To maintain their competitive edge in technology, South Korean companies have stepped up efforts to produce premium or third-generation batteries.

LG Energy Solution said it would build a cylindrical battery plant in the U.S. In February 2020, the company secured a deal to provide cylindrical lithium-ion cells to Lucid Motors, an American electric car maker. The long-term supply deal will help LG Energy Solution secure all business portfolios in the electric vehicle market, which is bisected by large pouches and small cylindrical cells.

LG Energy Solution highlighted its push to establish a localized production base, saying its investment would lead to the creation of over 10,000 new jobs. In response to President Joe Biden's Green New Deal initiative that would bring big changes to electric vehicle and ESS markets, the company promised to make further investments by 2030 and establish various types of supply chains with customers.

LG Energy Solution's preemptive investment followed unsuccessful negotiations with its domestic rival, SK Innovation (SKI), on the amount of compensation. The two companies have been locked in a legal battle over intellectual property rights. The U.S. International Trade Commission favored LG in February and issued a 10-year import ban on some of SKI's battery products. SKI lobbied the White House to overturn the decision, insisting it could jeopardize a $2.6 billion plant under construction in Georgia.